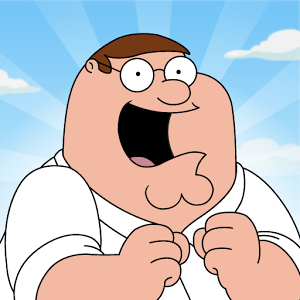 Family Guy: The Quest for Stuff is a quest-and-timer city building game.

This review of Family Guy: The Quest for Stuff was completed by the Australian Council on Children and the Media (ACCM) on 22 April 2014.

This review of Family Guy: The Quest for Stuff contains the following information:

The Quest for Stuff begins after the fictional city of Quahog has burned to the ground.  The game’s overweight main character Peter Griffin sets out to return it to its former state. The objective of the game is to unlock characters that players may send on quests to earn more money in order to unlock more characters and buildings. There are limited skills needed, but an understanding of strategy and problem solving may be useful.

The app begins with animated footage of characters talking about how the hit television series ‘Family Guy’ has been cancelled. There are explosions and animated violence between a man (the protagonist Peter Griffin) and Ernie the Giant Chicken. During the brawl, the entire town is accidentally set on fire and destroyed. Peter references himself being a jerk and saying that years of drinking have destroyed his cognitive function, but that he wishes to restore the town to its former state regardless, and requests assistance from other characters in doing so.

During gameplay, the individually unlocked characters have their own experience level. Once a new character is unlocked, a series of objectives appear as thought bubbles over their head. These are predominantly quests to collect items (e.g. ten frogs, six lipsticks, etc). These items are attained by waiting on building or quest timers for other characters, or by spending ‘clams’ (the central in-game currency). There are additional quests that involve things such as ‘Get the cable back’, ‘Build the Swanson House’ or sexually suggestive quests like ‘Fulfil Bonnie’s Needs’. There are also references to alcohol within quests such as Bonnie’s ‘Chug a bottle of wine’. Money and XP are obtained, which appear as small tokens that players can tap after completing quests.

The game encourages spending money by incorporating very significant time lags in regards to building and undertaking activities. Some actions will take up to 24 hours to be processed to completion, but players can skip the wait by using real-life money to purchase in-game clams. This may promote a culture of impatience and reckless spending amongst younger players.

Yes: In order to get more in-game currency, players can purchase a select range of packages from the store. The app asks players whether they want to get everything they need to complete a certain task by purchasing ‘Clams’, skipping waiting times that can range from a few seconds to over an hour by using these shells. Clams can be purchased in packages ranging from 50 clams for $1.99, to 3,500 clams for $99.99. You can also buy coins from the in-app store. These coins come in packages ranging from 500 coins for $1.99, up to 35,000 coins for $99.99. Although these purchases are optional, there is one quest that requires players to spend $4.99 in order to complete it – if money is not spent, the quest will remain in the player’s quest bar permanently.

The game encourages players to invite friends to play via Facebook, and additionally allows players to obtain rewards such as free clams if they visit the cities of friends who are also playing the game.

There is only advertising in regards to in-app purchases related to the game itself – no advertisements for external apps or products. The advertisement encourages players to purchase in-game currency.

There are multiple sexual references within the game. These are often within the game dialogue or within the quest titles (for instance, one quest which Peter may undertake is to ‘Fulfil Bonnie’s Needs’, whilst another involves a teenage boy ‘Enjoying Private Time’).