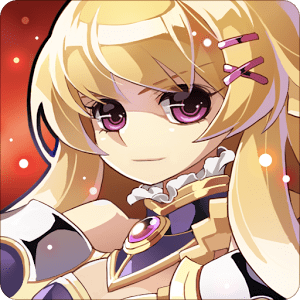 Fantasy War Tactics is a turn based combat game.

This review of Fantasy War Tactics was completed by the Australian Council on Children and the Media (ACCM) on 4 October 2015.

This review of Fantasy War Tactics contains the following information:

Fantasy War Tactics allows players to fight creatures via turn-based battles. The objective of the game is to battle creatures on various islands, thus conquering the world progressively – rewards can be obtained along the way. There are limited skills needed, but visual and motor skills assist in gameplay.

When the app is initially opened, players can begin as a Guest, or can elect to link the game to another account that already exists (thus being able to transfer over their progress). They are then asked to agree to the Terms and Service of the app before continuing. A small animation then plays, where players are asked what their name is – they must then enter this in. They are then introduced to another character, who is the ‘wizard who brought them back to life’. Players are told that they will fight by the side of this person to save the world.

From this point, players are taken to a top-down view of a small grassy area. Players have a Guide, who is a ‘wizard dreaming of world conquest!’. Players are then instructed to tap on a Map icon in the lower right-hand corner, which takes them to a larger map with various locations – only one location is unlocked at this point. Each island that can be visited has several areas to explore, which are also level-locked progressively.

Once players choose a place to explore/conquer, they are shown the rewards from completing the quest (including things such as gold coins, experience points and other resources such as red crystals), as well as the number of members in their party, and the level of difficulty that the quest will be. Players must then tap a specific location to move their character within the battlefield to this point. After this, players run into a monster called a ‘slime’, which they must battle. Battling involves selecting a skill in the attack menu along the bottom of the screen, and tapping on the monster in order to attack it. The player has a turn, and then their enemy is allowed a turn also. The aim is to reduce the opponent’s health bar (positioned above their head) before a player’s own health bar runs out. Some of the content within the battle may be inappropriately violent in nature for younger users – although the app presents quite animated, non-graphic deaths, the discussion between characters after a success involves some mature themes. For instance, the player’s character states ‘A cold-hearted, vile and vicious secret attack from behind an enemy’s unsuspecting back… I think this is a valid strategy!'.

The characterisation of individuals within the game also contains some mature themes. Upon being brought back to life by a magician, players appear to have lost their own free will – this is apparent when their ‘Master’ states ‘Since I revived her after death snuffed out her will to live, the focus of her life must now be me. I just have to think for both of us, so it doesn’t really matter. Hahahaha!’.

After battles are complete, players will unlock the ability to move onto the next dungeon on an island, and continue battling other creatures. As the levels progress, there are elements which make the game more challenging for players – for instance, some environments are either advantageous or disadvantageous. In areas where there is flat grass on the battlefield, players have an advantage. Conversely, areas that have stone and lava on the ground are disadvantageous to players, and can reduce their health slowly. There are also boss battles with one stronger enemy, as well as smaller enemies that players additionally must defeat. Some enemies who are defeated will become part of a player’s team, and will provide assistance during battles.

After several battles, players unlock the Equipment Menu. This allows players to equip weapons that they receive as rewards after battles. Furthermore, there is an in-game shop that allows players to purchase extra equipment using red crystals, ancient coins, and gold. The game contains an in-app purchase item that enables players to buy other resources – this is red crystals, and they can be purchased in packages of 90 for $2.99, 150 for $4.99, 300 for $9.99, 900 for $29.99, 1500 for $49.99, or 3000 for $99.99. Crystals can be used to purchase gold coins, for example, in packages of 30,000 gold for 30 red crystals, up to $3million gold coins for 2500 red crystals.

The game also contains a list of achievements that it is possible to obtain. These involve things such as ‘Log in every day and receive 1 crystal a day!’, ‘Clear boss dungeons 3 times’, ‘Send friendship points to ten friends’. Such achievements encourage the use of the online interactivity components of the app, as well as encourage users to sign on daily to continue playing.

This game incorporates in-app purchasing, which may encourage children to spend real-life money in a potentially reckless manner. The violence and discussion of violence may also pose a risk for younger players, with the app demonstrating animated battle scenes.

Players have a message inbox where they can receive Friendship Points from other individuals also playing the app. They may search lists of other players via their username, and also request to be ‘Friends’ within the game. Additionally, there is a ‘Chat Channel’ where players can interact in a live chat room with other individuals who are online at the same time. It is unclear as to whether this room is moderated.

Individuals play as a character that is female – she is presented as stereotypically attractive, with large eyes, long blonde hair and a petite frame. She also has very large breasts, which she displays in a corset-type top. She appears to have no free will, and is controlled by her male Master – she is positioned as a highly subservient character.