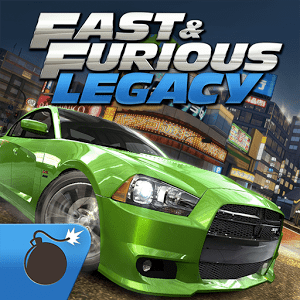 This review of Fast & Furious: Legacy was completed by the Australian Council on Children and the Media (ACCM) on 8 April 2015.

This review of Fast & Furious: Legacy contains the following information:

Fast & Furious: Legacy is a drag racing app based on the motion picture film where players work through a series of different racing tracks, earning experience, money and Upgrade Points to get better cars and battle the more difficult opponents. The objective is to win races against other in-game players, as well as battle friends within Crews. The skills required to play include reaction time and motor skills.

When the app is initially installed and opened, players are asked via a pop-up screen to sign into a Google+ account; this must be done in order to play the game. Players are also given the option of additionally signing in via their Fast and Furious: Legacy account (allowing them to save progress and play across multiple devices). Music then begins to play and individuals are shown a cut screen of images, accompanied by the dialogue: ‘I live my life a quarter mile at a time. Nothing else matters. For those ten seconds or less, I’m free’. After this, an animation displays a sequence where multiple cars appear to be attempting to evade police vehicles. The animation then stops, and players are met by a man named Roman. His dialogue states ‘Yo, Driver. This ain’t no ordinary Tokyo police action! Something else is going on… but I suggest we don’t stick around to find out what it is. Lose the cops! Now!’ Players are then given 3rd person view of a vehicle that they must drive and navigate through the streets. Once the car begins to move, players are informed that they must tap left or right on their device screen in order to change lanes – this ensures that they avoid obstacles and do not crash their vehicle. Players must change lanes multiple times in order to avoid numerous police blockades, and are given a congratulatory message when they achieve this. They can also drive up ramps to escape police, and this garners a reinforcing message that states ‘Air time!’. Players are also told that ‘Taking jumps will refill your Nitrous’, which offers players a boost in speed. During the race, players are given multiple statistics on the screen – they can view their progress through the track as a percentage, as well as their speed in kilometres per hour, and the number of seconds they are in front of the police by.

The app then takes players back to two weeks prior to the opening police chase, and presents two cars that look as though they are about to race. A woman named Letty states ‘Hey, welcome to Race Wars L.A! Tej and Roman told me to expect you. Let’s see what they’re talking about. I’ll lend you a car for now. Don’t mess up my ride.’ Drivers are then matched against Letty, and details of both cars are given (e.g. 2015 Mustang GT, vs 1972 Ford Gran Torino). Players need to tap the launch pedal in the bottom right-hand corner of the screen in order to rev their engine. They are also informed that they must tap the Launch button on the left-hand side at the correct moment (when ‘Go’ is announced) in order to get the best start. Players then begin the race, with the same method of tapping left and right in order to avoid obstacles and traffic cones along the road. Players are also in charge of shifting their own gears, and must tap on a gearbox icon during races when their tachometer needle is near the redline.

After the race, players are taken to the shipyard (called the ‘Grey market’), where cargo traders are hoping to unload some illegal cars in their shipping containers.

Players can play in a range of areas of the game: Story (which involves ‘rolling with the Fast family and travelling the world to take down notorious villains from the past); Challenge (contains races with specific challenges, such as Street, Drift and Drag), Ranked and Crew Battle (playing with team members). When playing through the main story, players go through drag races against in-game players. At the end of a race, they are informed if they won or lost, and are also given statistics on their finishing time, launch reaction, average speed, etc. They additionally gain experience points, as well as coins and tokens to purchase upgrades for their vehicle. Buying performance upgrades enhances the capabilities of the car, and ensures that players can perform at greater speeds and with better handling. Players can upgrade their engine, nitrous, suspension, tires, gearbox and chassis.

Players are able to engage in a live chat with other unknown players. This appears to be unmoderated (with comments being shared such as ‘u sux’, ‘screw u dude’, ‘I know screw me in the face’), and players can communicate freely about joining crews, racing, etc. Players have a public chat, a crew chat, as well as their own private inbox. Players are encouraged to join a Crew, with the incentive of in-game prizes such as gold and speed tokens.

The nature of promoting and glorifying speeding, unsafe driving, and drag racing (as well as viewing harming of police in a positive light) may be detrimental to younger, impressionable players.