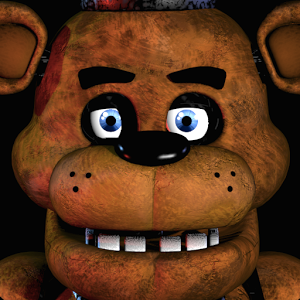 Five Nights at Freddy’s is a unique and simple horror game.

This review of Five Nights at Freddy’s was completed by the Australian Council on Children and the Media (ACCM) on 23 January 2015.

This review of Five Nights at Freddy’s contains the following information:

Five Nights at Freddy’s is a horror game that is founded upon a gradual build-up of fear and suspense. The objective of the game is to survive five nights within Freddy Fazbear’s Pizzeria, viewing each individual camera in order to keep an eye on the ‘characters’ that may approach and attempt to kill players. The skills required to play include motor skills, reaction time skills, strategy and problem-solving.

When the app is first opened, a small warning appears that tells players there will be flashing lights and noises within the content of the app. A menu then comes up which allows players to either continue an existing game or start a new one. It also gives players access to the online Shop – within this, players can elect to make in-app purchases using real-life currency. Players have the option of purchasing a Freddy Plushie for $0.99 (that can be positioned on the main desk that is visible during gameplay), a Bonnie Plushie for $0.99, a Chica Plushie for $0.99, and a Cheat Mode purchase (that offers unlimited power and radar map) for $4.99.

When the game itself begins, players are informed that their character has just begun the night shift at Fazbear’s Pizzeria – it is 12am when the game starts. The screen focuses in on a desk, which contains a moving fan and a telephone. The phone rings, and someone records a message to ‘help players get settled’ as they are starting a new job at Freddy’s. Players are told that there is ‘nothing to worry about’ and to just focus on ‘getting through the first shift’. The screen contains the time in the top right-hand corner, with a Power Left bar along the bottom of the screen (as the power in the building slowly declines, this bar slowly goes down – when this happens, players cannot keep the doors closed and are vulnerable to being attacked). The voice message tells players that the characters can get a bit ‘kooky’ at night, so just be aware that the characters do ‘wander a bit’. The only real risk to players’ safety is that if characters see them after hours, they’ll likely view them as a threat and might attempt to harm players if they find them.

Players have the ability to flick between the eleven cameras placed around the complex – they must keep an eye on all cameras as the characters get closer. The door should remain open and the lights should stay off, in order to conserve power when it is not needed. As characters get closer, players will hear static noises and crawling sounds – it is during these times that players should close the door and turn on the lights (thus draining power faster, but keeping themselves protected). The goal is to last the entire night whilst remaining alive.

If players are found by one of the characters, screams can be heard and the character’s face is presented at the forefront of the camera in a fear-inducing manner (seemingly appearing out of nowhere, and looking at players directly with a menacing expression). When the power runs out, the door opens automatically – flickering eyes can be seen in the corner of the room from one of the creatures, and it depends on how long players managed to last as to whether they survived.

If players survive, they must survive the following night. They are informed that there are blind spots right outside the door, and as a result, they must check the light at the door if they sense any characters may be coming. They are also told to check on characters in Pirate’s Cove (an area covered by a particular camera) as they will move frequently if players do not keep an eye on them.

Whilst the game is not violent or graphic, it plays upon horror-based strategies of suspense and fear. This may be upsetting for younger players who could find the content disturbing or frightening.