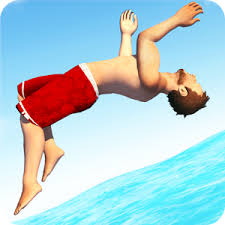 A simulated cliff diving game where players can select different divers to perform trick dives off various locations including trees, boats and elevated platforms. Coins are earned for successful dives. Caution: Not recommended for players under 18 years of age due to in-app purchasing and elements of gambling.

This review of Flip Diving was completed by the Australian Council on Children and the Media (ACCM) on 22 January 2018.

This review of Flip Diving contains the following information:

The game opens with a warning against recreating or re-enacting any of the stunt dives, but the nature of the game may endorse this behaviour. Game play involves manipulating a diver to perform increasingly complex dives from a variety of suspended platforms.

A simulator stunt diving game in which selected divers perform stunt dives in various locations. Additional divers, new dive locations and more complex stunt dives can be earned through successful dives but can also be purchased through the app store. Given the restriction to one diver and location in the free version and the time taken to earn coins, the game is clearly designed to encourage players to simply pay to unlock more game utility. Dives can be shared via social media, email and SMS and players can also post on the Flip Diving blog. The inducement to play a bingo style game of chance to “win free stuff” is a concerning along with the practice of cliff diving.

The rag doll style animation of divers allows them to appear relatively human, so some players may find the divers hitting the water or cliff/other surface quite confronting. Actual game play is guided by commentary and successful diving requires fine motor control and practice. Each dive is recorded and can be shared on Facebook, Twitter, YouTube or via email. Clicking on the Everplay icon takes players to a Flip Diving blog where any player can post comments. Only diver one is free, others must be purchased with coins earned in the game through successful dives or via in app purchases. There are a variety of divers to choose from, including one with armbands and a floaty ring on, suggesting he is young child although he appears to be an adult (see screenshot). Despite the initial warning, the depiction of a child as a stunt diver is problematic and may induce children to consider performing stunt dives. There is also a zombie diver covered in blood, and younger children may be frightened by this image.

The home page entices players to “spin for free stuff”, a clear replication of gambling in a bingo style game. If enough coins have not been earned through dives yet, players can pay for tickets, which range in price from $1.49 to $14.99. Players can also click on a video to view a demonstration of other games. The advertised game opens in the app store without any restriction for immediate download and many are rated as a 17+ games. Once the player returns to the game, the player is asked if they want to watch another video advertising another game, some inducements include double coins to watch more adverts.

Access to other divers and more complex dives and other locations can be purchased within the app. Other apps are also advertised within this app and are easily purchased by clicking on the videos/adverts. Additional coins are offered to watch more adverts.

Yes – elements of gambling - The game encourages players to “spin for free stuff” in a bingo style game of chance with prizes including access to more skilled divers and other stunt dives and locations. Players also get a daily free spin. One of the videos for a “puzzle game” advertised within the app, called Toon Blast, is remarkably similar in sounds and appearance to a poker machine.

Players are asked to watch videos demonstrating other games with payment of gold coins that allows them to buy more divers and more complex dives. Players are also asked to watch videos by offering them the chance to “double up” the amount of coins they earn, and to watch more advertising by offering them a “power up” which will allow them to perform more complex dives. Adverts also pop up during game play without clicking on the “watch video” button. To remove ads, players must pay $1.49.

Nothing overt, but all female divers depicted are attractive and slim, whilst the male divers vary in appearance.

The actual game narrative, depicting cliff diving (a recognised dangerous activity) may be of some concern as well as the aspects of the game that replicate gambling. Frequent adverts for higher age rated games may also be of concern.