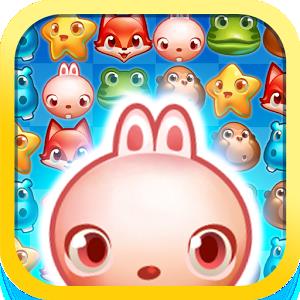 This review of Forest Mania was completed by the Australian Council on Children and the Media (ACCM) on 24 June 2014.

This review of Forest Mania contains the following information:

This review focuses on levels 1-15.

Forest Mania is a match three game involving the movement of squares with images on them. The objective of the game is to create matches of 3 or more pictures, and subsequently earn points and in-game currency. The skills required to play include spatial/visual and problem solving.

When the app is opened, players are brought to an initial screen that encourages them to log in via Facebook. They also have the option to play as a guest, however. The game informs individuals that they need to ‘collect 7 hippos, and that they must put the hippos in an arrangement of 3 within a vertical column in order to make a match. Players use their finger to swipe hippos of the same colour into their rightful place in order to make a match of three. This completes the level, and players are given a total score as well as a reward. They are also offered the option to Share their score with their friends via Facebook. At the beginning of every new level, players are given ‘Targets’ (e.g. ‘Collect the following required creatures’, with pictures of the creates that must be swiped and obtained). They are also offered the chance to select a ‘Booster’ if they have enough purple gems available. These purple gems are the in-app purchase items within the game. They may be purchased in packages of 7 gems for $0.99, 37 for $4.99, 77 for $9.99, 242 for $29.99, 420 for $49.99, and 875 for $99.99. Players will also occasionally earn several gems as a result of completing a level within the game.

It is possible to purchase SuperFruits with these gems, as well as to permanently increase the number of maximum lives a player may have attached to their in-game character. The game actually states to players ‘You’ll need to buy more gems after you run out’, implying in-app purchases are a necessary feature of the game. However, players are also offered the option of receiving free gems by viewing a range of selected advertisements for other apps, or downloading and/or playing these apps to a specified level. The number of gems obtained from doing this ranges from between 1 and 60+.

When playing through the levels, users are given a set number of moves they are able to make or swipe. The level only ends when players have no more moves left, as opposed to when they reach the objectives or target. Players also unlock different Boosters at the end of each level – for instance, the Rolling Stone booster removes all animals on one line, making it easier to achieve the objectives within a fewer number of moves. If a player runs out of moves without competing the objectives, they may purchase an additional 5 moves through the spending of gems. If they have none in their inventory, they either fail the level or must use real money to make an in-app purchase.

At sporadic intervals, full-screen advertisements will appear whilst playing the game. They must be closed manually, and are for external apps and products.

The app does not appear to pose any risk to players, but rather, it encourages players to utilise hand-eye coordination and problem solving skills in order to complete the challenging matches. However, the potentially expensive in-app purchasing may still prove problematic to younger users, and may warrant parental supervision or discussion surrounding this particular feature.

Players are encouraged to sign into the app via Facebook, so that they may compete against their friends and compare high scores.

At sporadic intervals, full-screen advertisements will appear whilst playing the game. They must be closed manually, and are for external apps and products.