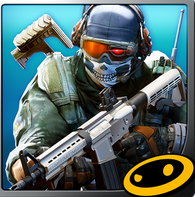 This review of Frontline Commando 2 was completed by the Australian Council on Children and the Media (ACCM) on 2 April 2014.

This review of Frontline Commando 2 contains the following information:

This is a third person shooter game with modern weapons, as well as realistic depictions of the battlefield and war. The player uses on-screen controls to fire at and kill enemies. The objective of this game is to complete the campaign section of a series of missions of increasing difficulty. This game requires no specific skills.

Frontline Commando 2 is a game in which the player is thrust into the field of combat. The missions begin with tutorial components, teaching the player to aim and shoot, to utilise squadmates and grenades, and to navigate the complex menu. Players are encouraged regularly to upgrade their weapons and squadmates. The game frequently features full-screen pop up ads, which require player action to close, and has a great number of features which players must buy in-game currency in order to unlock. Currency is required for speeding up tasks, purchasing new weapons, purchasing grenades and medkits, and upgrading every piece of equipment the player owns. In some missions, the player is allowed to try one of the more expensive weapons, and then is prompted in a full-screen offer after the mission to purchase that weapon at a discount.

The game contains very realistic depictions of war and parents should be aware of the potentially serious repercussions this could have on children. It also appears to encourage violent behaviour and romanticises the nature of weapon use.

Players are encouraged to fight against squadrons created by other players. No actual online communication occurs through this feature. Players are also encouraged to sync their Google+ account to the game to enable the app to publish achievements. This also allows the player to communicate with Google+ friends who also play the game.

This game contains a large number of full-screen advertisements that require manual player action to close.

All soldiers depicted (except for one) are male, and the only female soldier is a buxom female character who attempts to sell the player weapons at a discount.

This game has moderate to high level violence and accurate depictions of the field of combat. Parents should be aware of this before allowing children to play this game. Parents should also consider the way in which the game encourages the player to kill other human beings, and rewards the player for doing so.