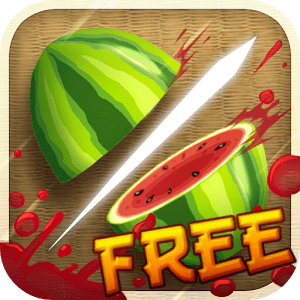 This review of Fruit Ninja Free was completed by the Australian Council on Children and the Media (ACCM) on 2 April 2014.

This review of Fruit Ninja Free contains the following information:

This is a game of skill where pieces of fruit and bombs are thrown into the air and, by using their finger to swipe, the player must slice the fruit and avoid the bombs.

The player begins by choosing from one of the three different styles of Fruit Ninja: Classic, Arcade Mode or Zen Mode.

Classic Mode begins with various pieces of fruit, such as mangos, bananas and strawberries, being thrown into the air. The aim is to swipe your fingers across the fruit before they fall down. If three or more pieces of fruit fall down the game is over. For each piece of fruit you slice you gain points.  You receive more points for slicing three or more pieces of fruit at the same time. After six fruits have been thrown, the bombs will begin being thrown amongst the fruit.  The second aim of the game is to slice the fruit without hitting bombs. (see below for more details on bombs and blades) As the game continues, more fruit and bombs will be thrown. The fruit will also fall to the ground faster, which increases the difficulty of the game.

At the end of the game your points are calculated in starfruit.  The conversion is five game points for one starfruit. Starfruits are the game's currency and they allow the player to buy special blades, different coloured backgrounds or power-ups from Gutsu's Cart.  You can receive extra starfruit by completing certain challenges or by buying them with real money. (see in App purchasing for more detail)

In Arcade Mode you are given sixty seconds to slice as many pieces of fruit as possible. The bombs in this mode do not end the game but rather deduct 10 points from your score. Arcade Mode has certain pieces of fruit which have different effects in the game, such as a frenzy banana which sends rapid fire fruit from both sides of the screen for a short period of time.

Zen Mode is the simplest style of Fruit Ninja because it does not include any special items or any bombs.  The player is given a minute and thirty seconds to slice as many pieces of fruit as possible.

Fruit Ninja is not aimed to be an educational game, however, it could be beneficial for developing fine motor skills and hand eye coordination.

Yes: Players can purchase starfruit for real money. At Gutsu's Cart (which is the in-app store) you can buy special items to help you when you play. Each of these items cost a certain amount of starfruit. The Player can buy packs of starfruit for $1.99 to $51.99

At the end of every game an advertisement appears for other apps. These advertisements are mostly other games from Halfbrick Studios.  Sometimes the apps advertised displayed mild violence, for example, the advertisement for the game 'Boom Beach' showed cartoon men blowing up a beach.

Whilst explicitly violent images are not shown in this game, it does encourage the use of swords.

Violence and scary material: The bombs in the game are small and black with red crosses and when you swipe them they explode.  The explosion contains no graphic material, just a flash of bright white light.

Blades are mentioned in the game but never visually shown. Your finger acts as the blade and when you swipe across the screen a line of coloured light appears. There are different blade options to choose from in the game but none of them are graphically violent.