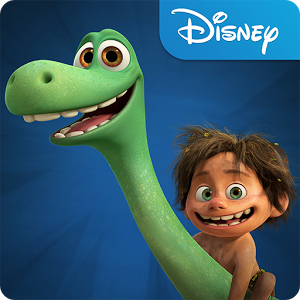 This review of Good Dinosaur: Dino Crossing was completed by the Australian Council on Children and the Media (ACCM) on 9 February 2016.

This review focuses on levels 1 to 8

Dino Crossing is an animated arcade runner game where individuals play through various levels of increasing difficulty. The objective of the game is to move through levels as quickly as possible, whilst avoiding obstacles and collecting items along the way. The skills needed centre mostly around reaction times and motor skills.

When the app is first opened, players are asked to enter in their age. They are subsequently taken to a home page containing options to begin a Journey, a locked option called ‘Endless’ (unlocks at level 4), as well as a Disney icon that takes players to similar free and paid apps produced by the same company, a Settings icon and a Controls icon. Upon beginning the Journey, players are shown an image of a dinosaur family coupled with text stating that ‘Arlo, a young Apatosaurus, lives on the family farm, but adventure waits just outside’. The app then tells players that they must ‘Make their way across the farm to the coop’ and to ‘Watch out for hay bales!’.

When gameplay itself begins, players are presented with a top-down view of a field. They are playing as Arlo, and must tap continually on the screen in order to move their character forward. It is necessary to move Arlo through a maze of obstacles, either tapping to move forward or swiping left/right to move him sideways. There are small collectible items (such as cherries) which Arlo can pick up along the way, as well as moving bays of hale that he must avoid coming into contact with. If Arlo runs into a hay bale, the level stops – players are then given a choice of watching a video to continue the run, or to start the run again from the beginning. The videos are video advertisements of similar gaming apps (e.g. Dragon Land – no inappropriate material present; Bingo Bash – gambling material present, etc) – they are full screen, and cannot be closed until completed. There are checkpoints along the way that help players from needing to start from scratch if they hit an obstacle. If players reach the finish line, the app presents a screen containing the time it took them to do so, the number of collectible cherries they obtained, and also offers players the option to take an image of Arlo and share it with friends via Facebook.

Players then continue through various levels, based around storylines/activities such as ‘Get to the silo to protect the family’s food for the winter’, and must complete levels as quickly as possible. Each level becomes increasingly challenging, with more moving objects presented, as well as more angles/corners to move around. Players can also utilise the cherries to purchase power-ups which make the gameplay easier for them.

The game additionally contains ‘Endless’ mode, where players must continue through obstacles for as long as possible – there is no finish line within this mode.

Upon completing a level, players have the option of taking an image of Arlo and sharing it with friends via Facebook.

If Arlo runs into a obstacle during a level, players are given a choice of watching a video to continue the run, or to start the run again from the beginning. The videos are video advertisements of similar gaming apps (e.g. Dragon Land – no inappropriate material present; Bingo Bash – gambling material present) – they are full screen, and cannot be closed until completed.

No game playing behaviour which may be of concern to parents of the 8+ age group was found during this review.