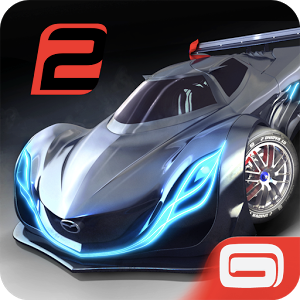 GT Racing 2 is a drag racing game that involves working through various tracks and races. The game involves steering as well as acceleration and breaking.

This review of GT Racing 2: The Real Car Exp was completed by the Australian Council on Children and the Media (ACCM) on 22 April 2014.

This review of GT Racing 2: The Real Car Exp contains the following information:

GT Racing 2 is a racing game where players work through a series of different tracks and races. The objective of the game is to earn XP points and money that can be used to unlock car upgrades, better vehicles and more difficult tracks. The skills needed include reaction time skills, in addition to effective motor skills.

The game begins at a car dealership, where players are informed that it is time to purchase a first vehicle in order to become a professional driver. Players begin with 20,000 worth of in-game coins, and 20$. There is a range of cars to choose from (although only 2 can be purchased with the money already provided, as others are out of the 20,000 coin price range), with stats provided on features such as top speed, acceleration, handling and brakes. Players are then brought to a title menu where they can ‘Enter the campaign’, ‘Continue’, or engage in Multiplayer racing and view the Leaderboards.

Once players enter the campaign, they must select a class of car (this involves things such as ‘compact, agile and fun vehicles’, or ‘track-ready performance cars’). It is also possible to buy a top speed booster using in-game currency, and players are told this will ‘give them the upper hand’ in the event. When racing, players can choose either gyroscopic controls to steer the vehicle (where individuals tilt the angle of the device itself) or controls which enable players to tap the left and right sides of the screen in order to turn.

After winning a race, players Level Up and win in-game currency. At the beginning of the game, they will level up an entire level if they place 1st, and part of a level if they place 2nd, 3rd, etc. However, the experience gained gradually decreases with time as the game becomes harder. The app then provides a leaderboard with all the drivers in the race, their cars, total race time and the time of their best lap. Once a race is finished, players are encouraged to spend in-game currency to upgrade their vehicles in order to win future, more difficult races. Players will race in courses that are either against other computerised vehicles, or race against a timer by themselves.

While players can gain bonuses such as speed and acceleration by buying them with in-game currency, they may also gain bonuses by logging into Facebook and inviting other friends to play. When purchasing bonuses, players can choose to wait approximately ten minutes for them to be applied to their car, or can use in-game cash to have it done instantly.

There are also real-time chat options to post messages and talk to other players. When players race in events, they must do so within part of a team. Players can either elect to create their own team, or join existing teams created by other players. It is possible to view the profiles of the other players within a team – lots of information is available, including things like: time spent racing, races completed, distance travelled, coins earned, top speed, cars owned, events won, a list of achievements won, and number of multiplayer trophies obtained.

There appear to be limited risks within the game aside from the in-app purchasing, and it may assist in the development of motor skills and reaction times.

The app asks players to sign in with their Facebook account, so they may invite their friends. The game also provides many rewards for doing this – before each race, players can elect to obtain upgrades to their vehicle (in terms of things such as better handling and faster acceleration) if they ‘Hire Friends’ via social networking platforms.

There is also a real-time chat option that appears largely unmoderated, where players may type anything to each other.

There is advertising in regards to in-app purchases related to the game itself. These advertisements encourage players to spend money, as they will receive a ‘Coin gift with every purchase’.

It is also possible to get ‘Free Cash’ within the game – this is done by watching advertisement videos from the developer and for other games (1$ for each video).

No game playing behaviour which may be of concern to parents was discovered during the review.