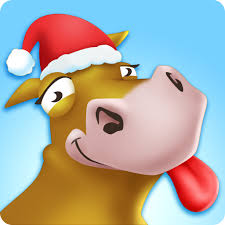 This review of Hay Day was completed by the Australian Council on Children and the Media (ACCM) on 24 February 2014.

This review of Hay Day contains the following information:

This requires strategy, planning, time management and resource management skills. The player must consider the most beneficial way to use their game coins and gems, as well as their farm resources.

The player begins with a small farm and a small allocation of game coins and gems. The coins can be used to purchase farm supplies.  they are also the form of payment received when goods are sold, either at the roadside stall, by filling orders or to visiting neighbours. The gems can be used to speed up the game. Gems are harder to obtain, generally being awarded when the player moves up a level or completes certain achievements. They can occasionally be won in games of chance.

A tutorial shows the player how to get started. The player must grow crops which can be sold and turned into animal feed or goods like bread. Animals can be bought – they must be fed and tended to collect eggs, milk etc.  A bakery, dairy, sugar mill and more can be purchased with money earned. Some activities have long waiting periods until the goods are grown/produced.

Players can visit neighbouring farms to view their set up and purchase items. Some of the neighbouring farms are those of fictitious game characters. Others are the farms of other players (see below in Online player profile section for more detail on this).

There are many levels to progress through, each adding new items which can be purchased, accessed or produced.

This game requires the player to plan ahead, consider the best use of resources, monitor multiple activities, be patient and also allows creativity with farm design. It is educational and entertaining. The game can become quite engrossing – there can be a lot happening which could make it difficult for some to put the game down.

While the content is suitable for young players, they may require adult assistance to manage the more strategic aspects of the game.

13 year old female player: “You have to be responsible, so you don’t run out of gems.”

Players are able to sign into Facebook. When a player signs into Facebook, some of their details become available for other players to see. Their roadside stall takes on the player’s first name. Their profile photo appears in the game’s brochure of produce which is for sale. Some other players’ photos also become visible here to the player. It is also possible to view the other players’ farms, as well as the farm’s statistics regarding sales etc. It is possible to ‘Like’ another player’s farm and to become a Follower. Many of the other players’ names are in foreign languages and scripts, indicating they are located in many countries around the world.

From time to time, a truck parks in front of the farm which holds a “Wheel of Fortune”. The player receives one free spin of the wheel, on which you can win useful tools and supplies. You can spend a game gem to re-spin. It is also possible to win game coins.

From time to time a “Mystery Box” appears out of the blue. It can be opened for 3 game gems. It generally contains useful items or you can win back your gems, or even more.

From time to time, players are invited to watch a “movie” to earn one game gem. The movie is an ad for another app. Sometimes the apps advertised are slot games – on one occasion there was a slot game based on the TV program Sex and the City.

The presence of a 'spin to win' wheel, where in game currency can be used to purchase additional spins to win random prizes is considered simulated gambling content. This feature is not an integral of game play.