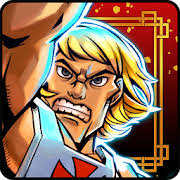 This app is a continuous battle game. Only simple tapping is required in order to play the game. Not suitable for children 8 and under, parental guidance for children aged 9 to 15 due to advertising, access to the device’s microphone, and social media connectivity.

This review of He-Man™ Tappers of Grayskull™ was completed by the Australian Council on Children and the Media (ACCM) on 29 November 2018.

This review of He-Man™ Tappers of Grayskull™ contains the following information:

He-man Tappers of Grayskull is a continuous fighting game where players simply tap the screen in order to make He-man attack the enemies. Every attack from He-man’s sword earns the player gold coins – which can be used to unlock features such as better attack skills, costumes and allies. In each stage, there are a number of enemies that need to be defeated before the main ‘big boss’ challenge. Defeating the big boss progresses the player to the next stage where enemies increase in strength. There is also a tournament mode where player’s scores are pitted against each other and compared at the end of the tournament time frame. High ranking players at the end of the tournament are rewarded with prizes (e.g.: 100 gems, 40 Medals, 6 weapon upgrades and 2 time travel potions).

Other than the tournament rewards for high ranking players, there doesn’t seem to be an obvious aim to this game. Players simply tap away, fighting enemies and earning coins for an unlimited amount of time – the game even keeps accumulating coins when it’s closed and not being played. The main areas of concern for parents are: Tapping – faster tapping makes for more successful game playing and rewards in this game, thus continual tapping in its extreme may not be good for developing fingers; Speech Recognition – action can be activated through speech. Speech data is then sent to Apple to “process requests”. This requires the player to give Apple permission to access the device’s microphone; Date of Birth – this was requested after opening the game for the second time. The reason for this request is ambiguous. It appears to be checking for age in reference to in-app purchasing. However, the current reviewer inputted a false date of birth, placing the player at the age of 6 and the game continued as normal (even though the developer’s own age recommendation is 9+).

Rewards can be earned by watching ads. Many of the ads are for other violent games.