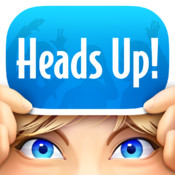 This is a game in which players have to guess words/names/titles, which may include celebrities, characters, movies, books and songs, which are described or acted by their friend/s.

This review of Heads Up! was completed by the Australian Council on Children and the Media (ACCM) on 26 March 2014.

This review of Heads Up! contains the following information:

This App has separate downloadable “card sets”. This review focuses on the following sets Just For Kids; Animals Gone Wild

This is a game in which players have to guess words/names/titles, which may include celebrities, characters, movies, books and songs, which are described or acted by their friend/s.

This game is played with one or more friends. Players can watch a short video tutorial presented by Ellen de Generes. The player chooses a category – there are a number of free categories (or decks) and more which can be purchased with money. A word, name or title is displayed on the device, which the player should hold in front of their forehead, so they cannot see the word but their team members can. Team members give clues and the player tries to guess the word.  When they player guesses the word correctly they tilt the device downwards and a new word is presented. They can pass and move to the next word by tilting the device upwards. The aim is to guess as many words as possible within the time limit of one minute. The game sometimes suggests extra challenges, such as to act it out without using any words.

While players are giving clues or acting out the word, the device records it on video. At the end of the round players can watch back the video. They can save the video or share it via email, Facebook, YouTube or to send it to Ellen.

Many of the categories involve movies, celebrities or songs which younger children will not know.  Even the “Just for Kids” category contained “The Hunger Games” and “Avatar” which are both M rated movies. Parents should be aware that there is a category called “Adult Supervision” – it must be purchased as an extra deck for $0.99 and contains many words and concepts which are not suitable for children. A few of the concepts and people are US specific.

Players need to use imagination and creative thinking.

Yes: Players can buy extra decks of words for $0.99 each.

The “Adult Supervision” category (which must be purchased as an extra deck) contained the clues “Slot Machine” and “Black Jack”.

Occasionally brand names are presented as the word to guess, for example toys or breakfast cereal. An optional deck which can be purchased is called “Branded” - players must guess the brand

The word “sex” was used in some of the “Adult Supervision” clues, as well as other words which are not coarse language but may be considered by some parents to be inappropriate for children.

None found but the content of some decks may be of concern to parents.