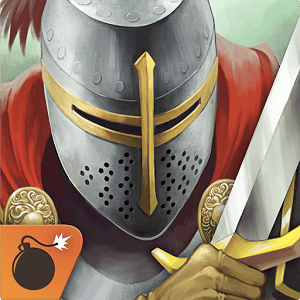 Kings of Camelot is an RPG multiplayer battle-card game. Caution: In app purchasing and animated violence

This review of Heroes of Camelot was completed by the Australian Council on Children and the Media (ACCM) on 22 April 2014.

This review of Heroes of Camelot contains the following information:

Heroes of Camelot is an RPG that takes place within the medieval world of dragons and mythological figures. The objective is to battle for survival by assembling, evolving and enhancing hundreds of heroes, each with distinct abilities and powers. There are limited skills needed, but an understanding of strategy and problem solving may be useful.

When players begin the game, they are provided with a backstory for the situation: Britain was once full of life, wealth and peace. Knights and Druids found a way of living serenely with one another. However, evil now consumes the land and a call to arms is desperately needed. King Arthur has summoned all the Knights and Druids on a quest to find the Holy Grail, Camelot’s only hope for peace. Players then select whether they wish to play as a knight (Vanguard) or a druid (Stormcaller).

Players begin by battling a difficult character known as the Black Knight. They lose (as the Black Knight has higher levels of health and attack) and are informed that they should go on quests to expand their team. Exploring is said to cost Stamina points, but the rewards in terms of Gold and Experience make it worthwhile for players. Stamina replenishes over time. After exploring, a Footman, Longbowman and an Enchantress join the team – this increases total health and attack points. As players level up, stamina is again increased. Once players have several characters in their team, it is possible to battle the Black Knight and win against him.  After this, Battle Results are presented, and players are told how much XP they gained, the amount of gold they collected, and how many summoning charms their new heroes may use. The characters are presented within cards which enable players to organise the characters (as units consisting of teams of 4) and adjust their skills. Cards can be upgraded in order to improve attack within the ‘Party’ section. Here, players can choose which characters (that all have different levels of attack and health) to include in the final 4-person team. Upgrading cards may be done by Enhancing cards (increasing card strength by absorbing cards into one another), Evolving cards (merging two of the same cards together to increase power) and selling cards for gold. When battling the Black Knight or other individuals, player’s skills and ability to attack are determined by the cards/characters they have. Attacks take place automatically, and the player arranges and strengthens the cards how they would like before the battle begins. During the battle, the cards of opposing characters are seen to be slashed and the number of XP gained is shown.

Mana also replenishes itself with time, and is used to engage in battles during quests. The amount of mana consumed equals the total mana cost of all cards active in a player’s party at any given point in time. Mana relishes itself by 1 unit every 1 minute.

There is also a Treasury where players can collect rewards after quests have been undertaken. In addition to this, there is an Arena which may only be accessed by players who have defeated Sir Balin le Savage. New cities are locked until existing cities have been conquered. Once players reach level 15, they are also able to create their own Guild. Some guilds are invite only, while others are open to requests from new potential players.

Yes: In order to buy more in-game cash, players can purchase a select range of packages from the store. The packages range from 350 coins for $5.49, up to 7000 for $109.99. Additional gems are used to purchase things like summoning stones, arena tickets, stamina as well as mana potions. When building things such as farms, it is also possible to skip the approximately 10 minute construction time by buying an ‘instant finish’ for US$0.99.

Players are able to engage in live chat with other players, via a small chat bubble in the bottom corner. It is possible to ask other players for their Facebook, phone number and personal details, etc – this may pose a dangerous risk to younger players.

There is only advertising in regards to in-app purchases related to the game itself – no advertisements for external apps or products. The advertisement encourages players to purchase in-game currency.

The woman who guides players through the game is very stereotypically attractive – she is blonde, has large breasts, and is wearing what appears to be tight leather clothing. She is displaying part of her midriff.

There was no game playing behaviour which may be of concern to parents discovered during the review.