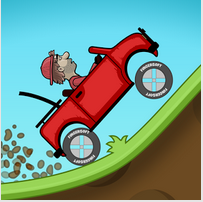 This review of Hill Climb Racing was completed by the Australian Council on Children and the Media (ACCM) on 2 April 2014.

This review of Hill Climb Racing contains the following information:

This game was played extensively, with all levels and vehicles unlocked.

This is a two-dimensional racing game, where the player controls a vehicle and navigates through various levels for coin rewards. The objective of this game is to achieve the highest personal distance on each level. This game requires a basic sense of two-dimensional physics.

This game is based around a character named Newton Bill as he navigates his way through various levels by driving a range of vehicles within numerous different environments. The player uses the Accelerator and Brake buttons to keep the vehicle upright and moving through the level, and high scores are stored locally for the player to compete against their best score. The game provides rewards in the form of coins that are handed out progressively as players traverse the levels. These coins can be used to unlock more levels, new vehicles, and upgrade vehicles to achieve maximum speed, traction etc. The game also has a finite fuel gauge that can be replenished by picking up extra fuel along the way.

This game has in-game advertising on the middle of the bottom half of the screen and in-app purchases.  This makes it unsuitable for younger children without supervision. However, there is an in-game option to remove advertisements which parents may consider purchasing if a young child is playing the game and parents do not wish that child to be exposed to the banner advertisements.

Advertisements appear along the bottom of the app window persistently during play.

The main character is male and there is no option to change the gender of the character to female.

Playing this game has the potential to become addictive due to the ease of gameplay as well as the regularity of rewards provided.