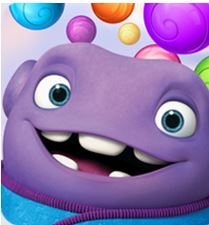 This review of Home: Boov Pop! was completed by the Australian Council on Children and the Media (ACCM) on 2 May 2015.

This review of Home: Boov Pop! contains the following information:

This app was reviewed up to level 10

Home Boov Pop! is a match-three puzzle game based on the film of the same name, ‘Home’. The objective of the game is to work through levels by matching three or more bubbles of the same colour in order to pop them and make them disappear. Skills needed to play are mostly based around problem solving and motor skills.

This app is based on the Dreamworks animated film of the same name. When the app is opened, players are asked for their age and presented with a message stating ‘This mobile game contains in-app purchases which cost real money that will be charged to your account. You can disable or change the ability to make in-app purchases by adjusting your device settings’. The app then asks players to sign in via a Google+ account before progressing onto actual gameplay. From here, the app takes players to a home screen with buttons that encourage them to either connect and play via Facebook, or to play as a Guest. Players are taken to a beautiful world in the sky that represents the level path which must be played through – there are numbers that represent level 1 and upwards, as well as icons showing other statistics such as a player’s total score, experience level, etc.

When beginning level 1 of gameplay, players are taken to a screen with a range of different coloured bubbles (e.g. pink and orange) and are instructed to create ‘Power Bubbles by making longer connections’. This is done by clicking and dragging a finger across the device screen where there are multiple bubbles of the same colour in one connected line. Players are also told to ‘match multiple power bubbles for a bigger chain reaction’, where they can go back and forth across multiple lines in order to connect similar coloured bubbles. After doing this, the bubbles that were touched disappear. Once a level is complete, players are presented with the number of coins they have earned, as well as an icon that states ‘Let’s Boov!’ (representing the character from the film which remains in the bottom right-hand corner of the screen at all times. They also receive the option of sharing their score and number of stars earned with friends via Facebook. If players get lots of bubbles in a connection, they can receive positive feedback such as a pop-up screen stating ‘You are a superstar!’.

As players progress through the levels, the game increases in difficulty. Players have a limited number of moves available to use in order to achieve the goals set out by each level – for instance, 9 moves can be used to connect and pop 20 blue bubbles and 20 orange bubbles. As a result, players must use strategy to ensure that they have enough moves to achieve the goals. During gameplay, there are special bubbles which, once clicked, will pop many surrounding bubbles nearby – these are shown with small swirls to indicate which ones they are to players. Within higher levels, additional features are included – for instance, players may ‘use rainbow bubbles to link different coloured bubbles’.

Players begin the game with 5 lives to use when they get stuck during a level, but this can be increased by spending 350 coins to obtain 3 additional lives, or by connecting via Facebook to ‘Ask friends for lives’. The stars that players earn at the end of levels also enable them to purchase extra things – for example, 20 stars lets players buy an extra life, 60 stars buys them 25 coins, whilst higher numbers of stars can purchase power-ups and recharge abilities which assist players during levels. The game also contains 48 possible Achievements which can be obtained – these involve things such as ‘Make your first chain reaction’, ‘Match 1000 purple tiles’, ‘Earn a lifetime total score of 1,000,000’, ‘Complete all levels of Florida area’, etc. The game additionally contains a feature known as the Wheel of Smek, which is unlocked when players earn 40 stars within their gameplay. This wheel offers players the chance to earn extra features, but appears to be reminiscent of a gambling/casino wheel.

Players have the option of sharing their scores at the end of each level with friends online via Facebook. Players are also incentivized to sign in via their Facebook account, as the app states that they will receive a 25 coin bonus in doing so.

The Wheel of Smek appears to vaguely represent a casino-based wheel of fortune, where prizes are awarded for spinning the wheel. This does not appear to pose much of a risk to young players, however.