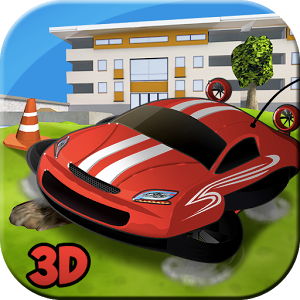 Hoverdroid is an arcade game based on driving a hovercraft.

This review of Hoverdroid 3D: RC Hovercraft was completed by the Australian Council on Children and the Media (ACCM) on 10 April 2015.

This review focuses on levels:1-12.

Hoverdroid is an animated arcade game where players can ride a hovercraft. The objective of the game is to progress through levels/missions of increasing difficulty, where players must direct their hovercraft through a range of obstacles and paths. The skills needed centre mostly around reaction times and motor skills.

When the app is opened, players are presented with a central menu screen – this contains a large Play button, as well as an icon to sign in via Facebook, an email icon which can be used to send a message to the app creators, a Settings button, as well as a small icon that encourages players to download the Helidroid 3 game for free. Upon clicking the Play icon, players are shown twenty-four levels, six of which are unlocked. The first level allows players to run through a tutorial program that assists them learning how to control their hovercraft. Players are informed when they begin this level that the controls are simple – they must press Up and Down arrow keys (situated in the bottom right-hand corner) in order to move their vehicle forwards and backwards. Left and right move the vehicle towards each side. Players are also able to touch and drag within other areas of the screen in order to look around and change their camera view. Players are first asked to drive their hovercraft into the parking space – once this is done, they are rewarded with a pop-up screen stating ‘Mission Completed!’, and also obtain several gold stars for their work.

During subsequent levels, players are informed of mission goals they should attempt to accomplish before they begin. For instance, the goals presented for level 2 are to explore the area for car skins and find the parking pad – they will achieve one star for completing this, two stars for finding one Bonus Skin, and three stars if they find two Bonus Skins. In level 3, the mission goals are to take less than 30 seconds to find an item, and to not touch any driving cones (rather, players must navigate between pairs of cones in order to complete a path).

As players progress through the levels, newer levels also unlock for players to run through. Other levels involve more in-depth and challenging tasks, such as driving an exact route in order to clear a snow path for other cars to drive behind. Players also have to drive up ramps and navigate successfully through large rings in a specific order, as well as to fly through courses. The levels do not have to be completed in order. Players have the option of using the directional arrows to control their hovercraft, but can also choose another form of controls that involve using two joysticks positioned on the screen – one to move forwards and back, and one to turn.

There are frequent advertisements which appear during the loading screen between levels.  These are static image-based advertisements, and contain ads for things such as the www.LifeLessons.gt website, the MenuLog app, Marvel Future Fight app. Some of these must be closed manually.

No game playing behaviour which might be of concern to parents was found during this review.