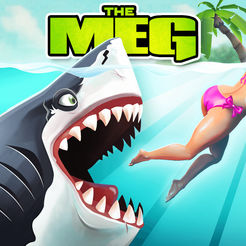 This app is a continuous survival game where players need good co-ordination and fast reaction time to stay alive. Caution: not suitable for children 12 and under; parental guidance for 13–15 due to graphic cartoon violence and social media connectivity.

This review of Hungry Shark World was completed by the Australian Council on Children and the Media (ACCM) on 20 September 2018.

This review of Hungry Shark World contains the following information:

In Hungry Shark World, players control their chosen shark in order to catch as many food items (fish, crabs, people, etc.) as possible to stay alive. Direction is achieved through swiping in the intended direction, with boosts achieved through tapping or holding the screen. Eating food items replenishes the life meter – which continually depletes during game play. Eating food also earns the player rewards such as gold coins and gems which can be used to purchase new sharks, obtain boosts and revive your shark if it dies (in order to maintain the rewards during the current swim attempt). The aim of the game is to swim as long as possible in one attempt without being eaten by a bigger shark or starving to death when your life meter runs out.

Although the game is only cartoon in appearance, the violence is quite graphic; particularly when your shark eats people. Not only does the shark latch onto the human as it would in real life, it thrashes about whilst a cloud of blood fills the surrounding water. However, the worst thing about the human attack is the audio – the human screams in terror and proceeds to make agonising sounds (including gurgling) as they die.

There are also a lot of ads in this game. Some ads are pop-up ones, others are the ones that you watch for 20 – 30 seconds in order to earn rewards – in fact, every time you open the app it gives you a daily reward with the chance of doubling it if you watch the ad. The ads are also quite age inappropriate for the developer’s age recommendation of 12+, many displaying other violent games and games featuring gambling. There is also a feature within the game where if you eat a special food item it gives you a “Gold Rush” – where food eaten within the small time frame increases by the times value (e.g., x9). During this feature, the music that is played is very similar in nature to the music slot machines play when you win and play a free game feature (e.g., 10 free spins – wins are tripled during free spins).

This game is clearly a promotional tool for the shark movie: The Meg. Ads for The Meg regularly appear and it may be the reason why rewards can be earned by sharing it on the social media platforms noted above.