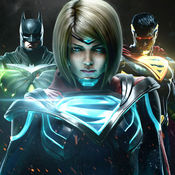 Injustice 2 is a fighting game featuring popular superheros from DC Comics. Fast reaction times, co-ordination and good fighting strategy required to play. Caution: Not recommended for children under 15 due to frequent violence and in-app purchasing.

This review of Injustice 2 was completed by the Australian Council on Children and the Media (ACCM) on 4 June 2017.

This review of Injustice 2 contains the following information:

Injustice 2 features many of the popular superheros from DC Comics, including Batman, Wonder Woman and The Flash, etc. In ‘campaign’ and ‘arena’ modes, players must choose a team of three for each battle (against another team of three), to fight against the computer or other players online. Successful battles earn the player credits and gems – which can be used to unlock new superheroes and upgrade their fighting abilities. There is also ‘story’ mode, where game play follows a plot relevant to each superhero. In this mode, battles are one-on-one with the computer.

Fighting involves tapping and swiping for different manoeuvres, and there are also a number of screen buttons to press for special (and “finishing”) moves. Therefore, as the fighting can be quite fast, players must be able to think quickly and co-ordinate their team based on the best fighting match against changing opponents - whilst taking into account each player’s vital health level.

There are no surprises with this type of format that this game is quite violent, particularly the “finishing” moves, which are very violent and graphic (Harley Quinn’s finishing move shows her setting her vicious dogs on the opponent before showing a first person view of her slamming her baseball bat into the player’s head). Having said this, there is no blood splatter and bone crunching type of effects which can be seen in other fighting games of the same genre; the game developers may have toned this down for the app version, as the console version in Australia is rated 15+. Regardless of not having seen the console version, ACCM maintains the view that as the violence is still graphic, that this game would not be suitable for children under 15.

Some parents may find the costumes of the female superheros inappropriate for revealing shape and bare skin.

As indicated above, some parents may find the fighting too violent. Parents may also view the use of weapons in fighting concerning.