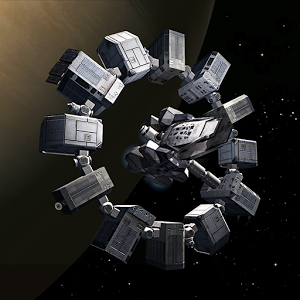 This review of Interstellar was completed by the Australian Council on Children and the Media (ACCM) on 23 November 2014.

This review of Interstellar contains the following information:

This review focuses on levels 1-6.

Interstellar is a creative app that allows players to customize their own solar system, utilising planets and orbits. The objective of this game is to create planets via customisation options (in regards to colour, composition, etc) and also explore the created galaxy through various activities. This game requires skills such as creativity, as well as motor and reaction time skills.

When the app is opened, users are asked to log in via a Google account. Following this, a black screen appears with text that states ‘Click to create your solar system’. Instructions are then given to players: ‘Tap +Body to add a planet or asteroid, tap +Orbit to add another orbit around the sun, tap a planet to customise it, drag an orbit to change its size, and drag a planet to change its location’. After this, players are then brought to a screen with a small solar system shown – the sun is in the centre, and players are directed towards the button to add a planet. Once a planet is added, players may edit and adjust each component of the planet image. They may adjust the composition of the planet (e.g. rock, metal, water, gas, asteroid or comet), the lava spread, lava tint and roughness – each of these three are edited on a sliding scale. The size of the planet is similarly adjustable, as is the central colour (which may be selected from a colour chart). Within the various compositions, players are able to add different features – for instance, within Gas planets, they may elect to add rings and also change the pattern/shape of them. For Comets, users may adjust the spread, tint and intensity of the object. For Metal, users may change the cloud coverage, tint and surface. There are multiple ‘variations’ for each category of composition, offering more foundational examples to players, and thus allowing for more creative freedom. Moons may also be added around individual planets.

In the advanced menu, users may adjust the orbit. In doing so, they may alter the shape of the orbit that planets move around the sun in. After an orbit is added, more planets may be added. It is additionally possible to change the appearance of the central sun in the middle of the solar system.

There is also a feature called Explore, which puts players on board a ship known as The Endurance. In doing this, they direct the path of the ship around the solar system – if a user directs the ship into a planet, a small noise is made and the ship is seen to explode from a distance. Upon accessing another feature known as the Galaxy Map, instructions are given to users stating ‘You are an explorer, a pioneer. The galaxy map is your access to solar systems and starting point for new journeys. Travel as far as possible without running out of fuel; return data to earth for further evaluation; avoid time in strong gravity fields that slow down your mission time’. After beginning a new journey, players have data on their solar power (which requires replenishing), fuel level, mission time and earth time. After sending the ship out into space, players may tap an accelerator and decelerator to control the movement – the goal is to slow down and enter orbit around planets. They then collect small tokens, move around to other planetary orbits, and eventually fly the ship into a wormhole. After this stage of the game is completed, the activity shifts to an over-the-shoulder third person style of game, where players tap left and right controls on either side of the screen to navigate their ship through a series of obstacles. They are then provided with Journey Results – this includes things such as distance travelled, mission time passed, data points gained, level obtained, etc. Players are also able to modify their ship, by purchasing components with small tokens. For example, it is possible to select a colour/texture skin for the ship that changes the appearance of the surface.

At the beginning of the app, the logos for Paramount and Warner Brothers appear before the title Interstellar. There are no pop-up advertisements within the app, and no advertisements for external apps or other games.