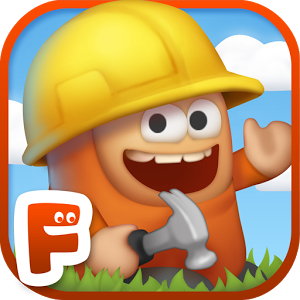 Inventioneers is an educational physics-based app. Caution: In app purchases

This review of Inventioneers was completed by the Australian Council on Children and the Media (ACCM) on 26 March 2016.

This review of Inventioneers contains the following information:

Inventioneers is an educational physics-based app. The central objective is to work through the available levels, by ensuring that the character is able to solve physical riddles by manipulating aspects of the environment. The skills involved in playing through this app include motor skills, decision-making, problem solving and knowledge of how physics works.

When the app is first installed, players are taken to a scrolling home menu with various options presented. The app begins on the last one, called ‘Once Upon a Time… The Fairy Tale’ – it is locked, and has a stamp on it which states ‘The Full Version!’. If players click on this option, they are presented with a pop-up which advertises the paid version of the app for $1.61. The pop-up advert must be manually closed, and contains information regarding the features within the full version (e.g. 40+ new objects, 70 new inventions to solve, 10+ new characters, etc). Players must scroll back to the beginning of the list, past the 7 paid options that must be unlocked by buying the full app.

Two options are available to players within the free version – a ‘Create your own levels!’ section, as well as 42 chapters of the first level (titled ‘Trouble in the Fields’). The home page also contains a settings menu, with links to the Privacy Policy, a link to Facebook, abilities to clear level progress within the game, purchase the paid version of the app, and read about the game. There is also another link on the main page that takes players to a webpage advertising other apps by the same developer, Filimundus. This is child-locked, and users are informed that they must press and hold on the name of an app to be taken to the Google Play Store page for it. These apps are paid, costing $2.57 to purchase (such as ‘Brio World – Railway’ and ‘My Little Work Garage’).

The game centres on solving and creating inventions, and sharing them with friends. Players learn complex physics issues, problem solving and machine construction. The characters within the game are called ‘Inventioneers’, and have special abilities (e.g. blowing air, creating fire, shooting lasers, etc). Each of these features can be used by players within inventions.

When players start The Field levels, they are introduced to a character named Windy. They are shown a landscape scene where Windy is crafting something. Players can tap on specific items positioned along the bottom of the screen (e.g. a piece of cheese) and drag it to the invention. The invention allows an action to occur – for instance, the sloped piece of cheese allows an apple to roll down it, which hits Windy in the back. Windy then shoots a gust of wind forwards and knocks a kitten out of a nearby tree. Once players complete a level, they obtain a pop-up with stars achieved depending on their performance. As the game progresses, it becomes increasingly challenging and physics-focussed. Players must stack items in very specific positions in order to ensure that Windy’s line of fire is directed where it needs to be. Players unlock new Create items as they progress through the levels.

Within the Create section, players are able to choose items and actually construct their own invention. They can choose from a range of items and craft their own problems, which they may save as separate levels. This requires considerable higher-order skills in areas of problem solving and physics.

YES: Players have the option of using real-life currency to make in-game purchases in the form of buying the full version of the app. This app costs $1.61. The game also advertises other apps created by the same developer, which cost $2.57 to purchase.

Players are able to like the Facebook page of the app by going via the Settings menu. Players can also ‘Create a User’ when they make their own levels, and subsequently can share these with other friends who are utilising the app also.

No gambling content was found at the time of this review.

The only advertisement within the app appears to be for the paid version of itself, not for other external apps/games. The pop-up advert must be manually closed, and contains information regarding the features within the full version (e.g. 40+ new objects, 70 new inventions to solve, 10+ new characters, etc).

No game playing behaviour which may be of concern to parents were found during this review.