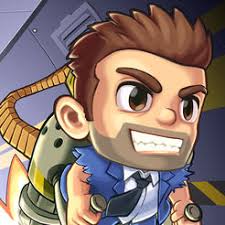 This app is a continuous runner style game. Players will need good reaction time to play. Not suitable for children 12 and under, parental guidance for adolescents 13 – 15 due to gambling-like features, in-app purchasing and social media connectivity.

This review of Jetpack Joyride was completed by the Australian Council on Children and the Media (ACCM) on 26 March 2019.

This review of Jetpack Joyride contains the following information:

Our Reviewer played the game for several hours.

In Jetpack Joyride, players control “Barry” – a covert agent looking man with a jet pack – through a continuous platform of on-coming obstacles. Movement forward is automatic; hence all players have to do is press and hold on screen to move up and let go to move down. Coins can be collected along the way which can be used to unlock features such as skins, jet packs and special power-ups (e.g. boosts, shields, rocket time, etc.). Also, there are icons in-game which can be collected which unlock certain similar features. The aim of the game is to travel as far as possible without dying.

There are a few common things that parents need to be diligent about in this game: connects to social media platforms (Facebook and Reddit), has quite a lot of ads which earn rewards from watching, and there are a lot of opportunities for in-app purchasing. Most importantly, parents need to be aware that the game has a slot machine feature – which appears at the end of every game played. The number of spins is determined by how many spin icons are collected during the jetpack part of the game. So, spins cannot be purchased with real money. However, on the slot machine screen, you can opt to “cash in” your spin tokens (1 spin token = 50 coins) instead of using them to spin. So, this does place value on the tokens (even if that value is not real-world currency based) and hence using the tokens to spin does represent a “risk for reward” style of behaviour which is similar to gambling.

There is some gambling elements in this game, for example:

There is a lot of advertising in this game, including: