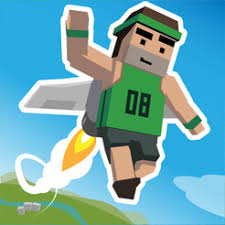 Jetpack Jump is a basic game of long jump. Reading skills and basic motor skills required. Not suitable under 12 and parental guidance to 16 due to excessive advertising and in-app purchasing, not protected through any parental lock.

This review of Jetpack Jump was completed by the Australian Council on Children and the Media (ACCM) on 14 January 2020.

This review of Jetpack Jump contains the following information:

All available features were considered in this review.

Jetpack Jump is a basic game with only one activity to be played which is ‘triple jump’. The activity is set in an Olympic arena with some judges and flags in the background. The instructions are written on the screen. The player must ‘tap to start’ before an animated man runs towards the sand pit. When he reaches the take off point, ‘tap to jump’, the player must touch the screen and the character jumps. The player must tap the screen twice more when the character touches the ground again (emulating triple jump). On the final jump, the player can activate the ‘jet pack’ which involves holding the boost bar on the left hand side of the screen. The character eventually lands on the ground and slides across which reveals the final distance. The aim of the game is to get as far as possible. Coin rewards are given after each attempt and can be used to purchase upgrades such as an additional jetpack or additional jumping height. There is some encouragement throughout the activity such as ‘perfect’ flashing on the screen for a perfect take off. When the character touches the ground, the phone vibrates.

Jetpack Jump may be an enjoyable game for some young children, however, it is likely to lack interest. Additionally, as instructions are written, younger children would be unable to play without assistance from an adult. Unfortunately, there are excessive advertisements within the app. For example on the left hand side of the main screen, it appears as if there is another element to the game and the words ‘play now’ are written, however this opens a new window to purchase an app. There is also an advertisement banner below which advertises different apps. Additionally, after every attempt when clicking to ‘claim coins’ (which is required to play again) a video of an app advertisement appears, and the whole video must be watched to be able to exit. To exit, the player must click a small cross on the left hand side of the screen which is likely to be missed by young children. Additionally, there is an option to ‘double’ or even ‘triple’ the coin reward, which again leads to a video app advertisement. There is an option to remove the advertisements on the main screen, which costs $4.49, this is not behind any parental lock. There is also an in-app purchase option on the main screen to become a ‘VIP’. This VIP membership costs $22.49 per month, and again is not behind a parental lock. The VIP features remove the advertisements and give the jumping character additional features. An additional concerning feature is the use of push notifications. If enabled, the app will send you notifications several times daily e.g., ‘$700 is waiting for you, come and jump.’ Overall, the multiple elements of advertising and in-app purchasing make this a concerning app for children to play.

Use of push notifications enticing children to come back and play the game.