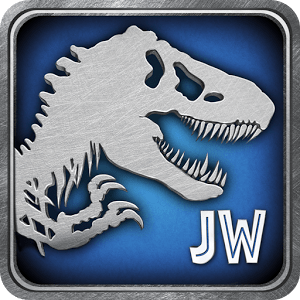 This review of Jurassic World: The Game was completed by the Australian Council on Children and the Media (ACCM) on 18 June 2015.

This review of Jurassic World: The Game contains the following information:

This review focuses on Levels:1-8.

Jurassic World: The Game is a strategy quest-and-timer based app that centres on the concept of building a ‘Jurassic Park’ theme park. The objective of the game is to make structures that will contribute to the running of the park, and enable players to allow their dinosaurs to live and thrive. There are limited skills needed, but an understanding of strategy and problem solving may be useful, in addition to basic motor skills when using the app.

When the app is opened, players are shown a pop-up screen with a legal notice where they must click ‘Confirm’ in order to agree to the privacy policy and terms of service. After this, a video animation is shown involving a military helicopter flying into a large base on a rainy night. The video then shows dinosaurs being released into the compound. Players are then taken to a battle arena where a dinosaur trainer asks players whether their ‘girl has what it takes’. Players are subsequently instructed to charge an attack at the triceratops – this involves clicking a red button at the bottom of the screen, which leads to their dinosaur attacking the opposing dinosaur. The violence is presented in a realistic manner and wounds can be seen, whilst the health bars of both begin to deplete gradually upon being attacked. The opponent then has a turn to attack. Players are then told that the data will be analysed for research, relating to the battle between the prehistoric creatures.

After this, players are taken to an overhead timer-and-quest style view of a park, where one dinosaur is being held in a paddock. They are told to ‘visit their dinosaur’ and feed him, using food stores provided by the game in order to level up the creature. Players are then informed that they can ‘genetically modify’ their dinosaurs by blending them with another species, thus significantly enhancing the strength. Players are able to speed up the time it takes to do this by utilising in-game currency. After this, players use their dinosaur in a second battle where they kill their opponent – after this takes place, a ‘Victory!’ sign appears on the screen to reward players. As a result, players also gain a new dinosaur (a majungasaurus) to ‘hatch’ for them to use in subsequent battles. Once hatched, players are able to place this dinosaur in a paddock next to their other one, and gain experience points for doing so.

Players are then encouraged to complete ‘missions’ that enhance their area of Jurassic Park – building new resources (such as an ACU security office, decorative fountains, etc) gains players experience points and other rewards. They are also gain DNA by either selling dinosaurs from cages, or by ‘Getting it for Free’ by viewing video advertisements for other apps – this includes apps such as Game of War: Fire Age (with sexual and violent content). These advertisements are full-screen videos and cannot be closed until the ad has finished playing to completion.

The game also includes a ‘Dino Market’ store where players can buy new dinosaurs (with different health/attack statistics) in exchange for resources. Players can buy from categories of dinosaurs such as carnivores, herbivores, pterosaurs, amphibians, and hybrids. Additionally, players are able to battle other players from around the world, or battle their friends, by playing online.

Players are able to battle other players from around the world, or battle their friends, by playing online. Players are also encouraged to sign in via social platforms such as Facebook.

There is an option to receive in-game resources for free by viewing video advertisements for other apps – this includes apps such as Game of War: Fire Age (with sexual and violent content). These advertisements are full-screen videos and cannot be closed until the ad has finished playing to completion.

This game contains violent realistic styled battles between dinosaurs which result in wounds or death to a dinosaur.

The extensive in-app purchasing and time-lag features may encourage the spending of real-life money.

This is an official mobile game based on the M rated movie Jurassic World.