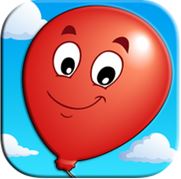 This review of Kids Balloon Pop Game Free was completed by the Australian Council on Children and the Media (ACCM) on 5 August 2015.

This app was played to completion

Kids Balloon Pop is a game with a somewhat educational focus for children. The objective of the game is to tap on balloons as they float past the screen, identifying letters in the alphabet as well as numbers from 1-20. The skills required include motor skills, as well as identification skills regarding numbers and letters.

When the app is installed and opened, players are taken to a menu screen which contains a graphic of animated balloons, a play button, an icon with a dollar sign, as well as an icon which is labelled as ‘More Games’.

Within the More Games section, players can access an additional 21 games. These include games such as puzzles, memory games, etc. However, a ‘runtime’ error appears when attempting to open these games – this will likely be addressed by the developer in time.

In the ‘Normal’ mode of the game, the gameplay involves tapping to pop the floating balloons that travel from the bottom of the screen up to the top. If balloons are missed, there are no consequences to players. Parents are able to enter the settings (they must solve a basic math equation to do this) and adjust the difficulty of the game, by altering the speed at which the balloons travel, as well as the size of the balloons. Some of the balloons that pass contain other imagery, such as a love heart, a musical note, or a rainbow. These cannot be tapped, however, and players are told that this feature can be unlocked through buying the paid version of the game.

The other modes are the ‘A-Z’ and ‘1-20’ ones - these involve a similar process, but players must tap on the balloons labelled either with letters or numbers. They are mixed with balloons that are plain, but all the letters in the alphabet, and all the numbers between 1 and 20, must be tapped before the level is completed.

In order to access the in-app purchases store, players must complete a small mathematical calculation (e.g. 4+2) in order to certify their age, as this section is labelled as ‘Parents only!’. Players are then told they may ‘Unlock the full game’ by making an in-app purchase of $1.99.