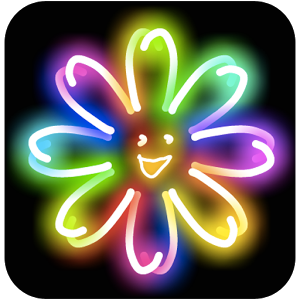 This review of Kids Doodle: Color & Draw was completed by the Australian Council on Children and the Media (ACCM) on 24 March 2015.

This game does not feature pre-set levels – however, the entire app was played for this review.

Kids Doodle is a drawing application that enables users to create pictures and artworks of their own design. The objective is to create as many artworks as desired, through utilising the various artistic tools (e.g. paintbrushes, stencils) available. The skills required to play are creative and visual predominantly, as well as motor skills being needed to functionally use the app.

When the app is opened, players are brought to a home screen page containing a black background, as well as rainbow-coloured text. There are multiple options, including ‘New’, ‘Photo’, ‘Gallery’, and ‘Ad-free’. Additionally, there are four small picture icons situated along the bottom of the screen. The small heart-shape takes players to the Google Play store to install the app Kids Glow: Doodle with Stars. Likewise, the three other graphic icons take players to various other Google Play Store applications created by Doodle Joy Studio, the same creators of Kids Doodle.

When players enter the area of the app titled ‘New’, they are provided with a black screen in addition to several small icons along the bottom. Tapping the blank white page changes the colour of the background to a solid white colour. Tapping this again takes the background image through a range of various other solid colours. There is a small paintbrush icon that, once tapped, allows players to choose a particular style of painting from a range of approximately 25 styles. Some of these create painted lines of a single colour which then change when a player lifts their finger off the device screen, and then presses down once more. Other styles allow a rainbow pattern whilst a player’s finger is continually depressed. Each of these styles are unique in their appearance, with some appearing to be lines of coloured light, whilst others are thicker and can be used for shading. Other styles involve crayon-like consistencies, blurred edges, etc. In addition to these styles of lines, the app also contains object patterns that can be used artistically. These include small circles, bubbles, heart-shaped icons, a range of sparkles and stars, as well as different sized firework explosions.

It is possible to erase small parts of the painting with an eraser brush, as well to Undo or Redo several brush strokes in a row. Players are also able to either start their painting over without saving, or to save their design to view later. In addition to these features, there is also a ‘Play’ icon that demonstrates the painting process from beginning to end for players to watch.

The ‘Photo’ option from the main menu enables players to select an existing image from their device, upon which to paint over the top of. The ‘Gallery’ option from the home screen is a place where saved images/paintings are collated.

The app does not appear to pose any overt risks to children, and may provide a fun way of practicing spatial/visual skills as well as encouraging creativity and artistic design in young children.

When players are utilising the app, there are small banner advertisements situated along the top portion of the screen. These advertise other external apps, such as ‘Jelly Slice’, ‘Pirates Cannons’, ‘Cannons Soldiers’, ‘FlappyBird’, etc. The ad-free option that is referenced on the main home page takes players to a download/install link for a different version of the app within the Google Play Store – this app costs $1.02 and is called Kids Doodle: Color Draw Pro.