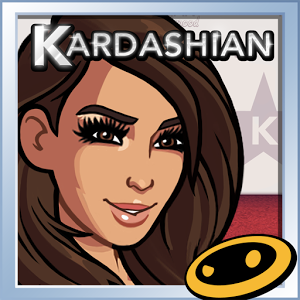 This review of Kim Kardashian: Hollywood was completed by the Australian Council on Children and the Media (ACCM) on 25 August 2014.

This review of Kim Kardashian: Hollywood contains the following information:

This review focuses on levels 1 to 10

Kim Kardashian: Hollywood is a timer-and-quest app set within the world of Hollywood socialites. It centres on the famous celebrity Kim Kardashian, and the world of gossip, photoshoots and popularity. The objective of the game is to create a character and achieve increasing levels of fame by completing activities (e.g. photoshoots, going to meetings with publicists, updating your wardrobe, etc). There are limited skills needed, as this is predominantly a tap-based game where players follow rudimentary instructions to progress through the plot.

When the app is initially opened, players are brought to a screen labelled ‘Your Star’ – here, they are given the option of choosing a male or female character to play as. There are also options to ‘Randomise’ (this option changes the appearance of a player’s character) or ‘Kustomise’ (where players are offered the option to adjust their character’s appearance by changing each individual part). Within the setting that enables players to customise their characters, they are given a range of different facial shapes, eyes, noses, lips, hair styles and hair colours, upper body clothing, lower body clothing, shoes and accessories to select from. Some of the options within each of these categories are level-locked, and cannot be accessed at the beginning of the game. Other items must be purchased with in-game currency options.

When players begin the game by clicking on the ‘Start’ option, they are transported to the inside of a fashion store. Players may click on another male character present in order to interact with him and hear his dialogue (which is both written and also spoken with voiceover narration). At times, players are given only one option with which to reply to other characters – however, there are times when they have a selection of two or three options to choose from. Depending on which option players choose, the response from other in-game characters will differ.

The scenario is then explained to players – they are a sales clerk in a retail store, and are about to close up for the day. Players are told that to do tasks and activities within the game, they can swipe left and right across the screen to find objects with small arrows hovering over them (indicating that an action may be completed) and click on the object in order to action it. Actioning things utilizes energy in the form of blue lightning. However, players are rewarded for engaging in such activities by being provided with in-game money as well as experience points that allow players to level-up their characters.

When players exit the store, they are met by a distressed Kim Kardashian in the street just outside – she explains that the back of her shirt ripped and she is on her way “to a shoot with Garrett St Clair. THE Garrett St Clair”. Players then go inside the store with Kim and assist her in choosing an outfit, offering it to her for free because of her fame. In doing so, the player’s character earns an invitation to the photoshoot Kim will be attending.

In order to progress the story, objectives and goals appear to guide players in small boxes in the top lefthand corner of the screen (e.g. ‘Use the bus stop to travel to Beverly Hills’ and ‘Go to the Metropolitan Magazine Building’). The photoshoot (and other activities) have a set time allocated to their completion – for instance, activities may take anywhere between minutes and hours to complete. However, this process may be sped up by clicking on various components within the scene. For example, to speed up the photoshoot, players may check their makeup, change their wardrobe, complete a profile shot, etc. It utilizes blue energy to do these things (and they cannot be completed without this), but it also offers players rewards. Blue energy can be replenished by using silver K stars.

Over the course of the app, players are encouraged to find a manager and to increase publicity for themselves in every manner possible. Along their journey, players have the option of making their characters either network or flirt with other characters (and get into verbal altercations with the ex-girlfriends of men they have flirted with), to be rude and talk down to others (e.g. when a strange man asks if players believe he will get into a party, they can respond with a polite comment or simply say ‘No’), etc. The manner in which players are able to ‘flirts’ is simplistically presented – as a female character, players merely whip their hair around and are able to obtain the phone number of men they have never met before. Players are encouraged by their entertainment managers to start rumours about other celebrities, because even bad publicity is considered worthwhile within the game. They are additionally told by their managers that they are a ‘nothing’ and a ‘nobody’, are asked by random jealous strangers ‘OMG! Who the eff do you think you are?!’. Players are told by their manager to ‘Keep your head down – or up… or wherever the photographers want it! Work hard, and you’ll go from nobody to being on the fringe of the public’s mind in no time. Exposure, exposure, exposure!’ They are further asked by a publicist ‘Do you have a… boyfriend, girlfriend, or… any friends? Don’t tell me you’re a bitter loner. I WON’T represent another one of those,’ and are instructed to go on a date to gain more publicity because ‘A date shouldn’t be too hard to find: this city is filled with lonely, if not desperate people.’ Publicists also suggest seeking revenge upon others by spreading rumours and gossip to tarnish their reputation and gain the player’s character more favour with the general public.

The game encourages spending money by incorporating very significant time lags in regards to building and undertaking activities. Some actions will take up to 24 hours to be processed to completion, but players can skip the wait by using money to purchase in-game K stars.

No gambling content was found during the review of this app.

There are full-screen advertisements which pop-up frequently throughout the game, and must be manually closed. These advertise apps of different genres, including fashion apps, children’s games, as well as more adult games such as Spartan Wars: God of Olympus.  Players may also elect to download other advertised apps, or watch thirty-second video advertisements for other apps, in order to obtain free silver Kim stars or in-game money.

The app depicts very strong gender stereotypes, with women presented as manipulative and wanting want fame and adoration from society. The women are attired in tight-fitted, sexually attractive clothing, and are seen to be wearing considerable amounts of makeup. They have disproportionate physical figures, with unnaturally small waists, large hips and a large bust, whilst being thin everywhere else. It is encouraged that women use others as mere tools to network or flirt with. It highlights that they are ‘nothing’ if they are not famous, and informs players that even bad behaviour can result in good publicity and creating a public profile that will ensure they receive attention.

There is extensive in-app purchasing and time-lag features; overt gender stereotypes, encouragement of revenge-seeking and the sexualisation of women.