Kingdoms of Camelot: Battle for the North - Kabam 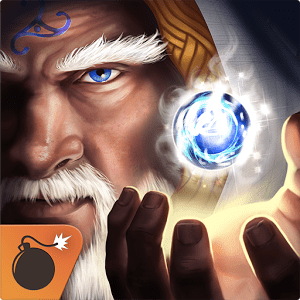 This review of Kingdoms of Camelot: Battle for the North was completed by the Australian Council on Children and the Media (ACCM) on 22 April 2014.

This review of Kingdoms of Camelot: Battle for the North contains the following information:

Kingdoms of Camelot is a strategy game that allows players to build cities from the ground up, forge diplomatic alliances, train armies, and conquer enemies. The objective is to build as much as possible, and to craft a fully functional city which has its own defences. There are limited skills needed, but an understanding of strategy and problem solving may be useful.

The game begins as King Arthur describes to players that his sister Queen Morgause needs protecting, and requires assistance in rebuilding her realm and defeating the Picts. The central game objectives are to build and upgrade buildings, produce resources, research new technology and train troops for battle. The Queen begins by asking players to start by building cottages to provide citizens with shelter. After completing quests like this, players can claim rewards, both in terms of gold as well as resources and items. In order to recover research, the Alchemy Lab is a place players are required to visit. Players are encouraged to research things such as fertiliser to boost the production on the farms, thus supplying more food to the city. It is possible to use a Magical Hourglass to speed up the progress of the research (by paying with gems), or allow it to finish within the natural time (anywhere from several minutes to multiple hours).

After this, players will level up to Level 2, subsequently claiming rewards such as unlocking Militiamen and Archers to assist them, and unlocking Barracks within which to train troops. The Queen mentions that she can only shield players from attack for seven days (or reaches level 5), after which they are on their own and must defends themselves – players cannot attack or be attacked during this time. This is a particularly useful thing, as it enables players the time to build their city’s defences, increase their village population, train troops as well as build typical city necessities such as farms, windmills, mines, quarries and sawmills. Players build these as part of the game’s necessary quests.

Within the game, it is possible to create and visit a variety of cities. Players can view their individual player information also, which involves details such as their particular level (which increases based on how much of the city they repair), a player’s level of ‘might’ (which increased based on the number of troops a player has trained), as well as details of owned cities – including the population numbers, food supply and ‘happiness’ level.

In regards to joining alliances, this feature is a necessary part of the game if players wish to obtain a greater number of resources as well as have additional support when the city is under attack. There are alliances that are suitable for different play-styles, including more defensive and offensive alliances.

When undertaking battles within the player’s own city, army size is unlimited when the attacker has 100,000 soldiers or less. Players can elect to set soldiers or knights as leaders within the army – this assists in strengthening defences. It is also possible to elect to keep a city’s resources stored in a storehouse, thus providing more of a chance that they will remain protected from attackers. Troops can also be hid in sanctuaries in order to keep them safe. The Knight’s Hall is an area within the game which allows players to view the knights they have trained, increase their level through the use of training shields, as well as control and manage the positions knights will have when they are not attacking or defending cities. There are four central positions which all achieve different things: the Steward position, Marshall position, Alchemist position and the Foreman position.

The game encourages spending money by incorporating very significant time lags in regards to building and undertaking activities. Some actions will take up to 24 hours to be processed to completion, but players can skip the wait by using money to purchase in-game coins and time turners.

Yes: Within the Store, it is possible to use money to purchase the central in-game currency of gems. There are a range of packages to choose from, ranging from buying 50 gems for $5.49, up to 1600 gems for $109.99. There are many in-game items that are purchasable using gems. These items range from things costing 1 gem (such as the Squire’s Hourglass), to 450 gems (for the chest of Magical Restoration). This encourages spending money to purchase large quantities of gems within the game.

There is a live chat component that appears to be unmoderated. There is also a link within the game to an external online forum. In addition to this, there are settings that enable users to create a chat ignore and mail block list – however, the existence of private and public chat may pose a risk to younger players. It is also possible to connect via Facebook, as well as email. It is further possible to send text messages via the app.

There is a feature within the game called ‘Merlin’s Gift’ which involves using tokens to select a random chest out of 9 different ones, to gain a random free item (e.g. 60,000 coins, 50,000 stone, etc). This somewhat simulates gambling, as tokens or gems are needed to play this game of chance.

There is only advertising in regards to in-app purchases and game developer related to the game itself – no advertisements for external apps or products. The advertisement encourages players to purchase in-game currency, as well as encouraging players to create a Kabam.com account in order to receive 75 free gems, save game progress and receive exclusive offers. Otherwise, players may use the app as a guest.

King Arthur looks very masculine in a cloak, whereas Queen Morgause is wearing a very low-cut dress. She is stereotypically attractive, with long wavy hair and feminine features.

Within the Rank Leaderboard, it is possible for other online players to use inappropriate language which will show up in the name of the Alliance they belong to. For instance, one player was listed under the Alliance of ‘MotherFokers’.

The extensive in-app purchasing and time-lag features encourage the spending of real-life money.