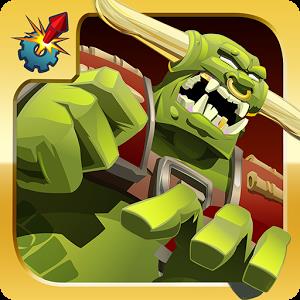 Kingdoms of Zenia is a timer-and-quest app with a story based on war and medieval land ownership. Caution: in-app purchases, online interaction

This review of Kingdoms of Zenia: Dragon Wars was completed by the Australian Council on Children and the Media (ACCM) on 27 June 2014.

This review of Kingdoms of Zenia: Dragon Wars contains the following information:

Kingdom of Zenia is a timer-and-quest app that allows players to battle enemies and build up their town to ready itself for war. The objective of the game is to build structures, collect resources and battle enemy troops. There are limited skills required when playing the game, although effective strategy and resource management may be useful.

The app opens with an animated segment containing images and descriptive text narration. This text tells the story of a time of war when a usurper, the Dragon King, took over the land of Zenia. The players are encouraged to play the role of the hero, and to raise an army of farmers and peasants in an effort to restore Zenia.

The app then encourages players through a pop-up option to log into Google Play Game Services to enter their town and see Leaderboards and Achievements. The app informs players that their camp is soon to be discovered by the Dragon King, and must head them off. The members of a player’s team offer such information, and take the form of characters such as General Anders and Reginar the Wise. After a short segment that shows a battle from a sky view, the General tells players (titled as ‘Your Majesty’) that they were victorious in winning the battle. After this, the Dragon King sends in his dragons and defeats the army. It is suggested by the General that players use lightening spells that will be cast upon command, as the player is the true heir to Zenia’s throne. Spells are cast by tapping on the battlefield and aiming for the dragons – one tap kills each dragon. During battles, there are two long red bars that run along the bottom of the screen – these represent the health of the player’s team and the enemy’s team also. Once either runs out, they lose the battle. There are 40 battles to work through within the app.

However, before growing and rebuilding their army, players need to start producing resources. Reginar The Wise recommends that a lumber camp be constructed in order to produce some lumber. Players are required to click the ‘Build’ button and choose the lumbermill from the list of potential structures to build. Players are informed that ‘Usually this takes a while, but let’s use a gem to rush the lumber camp’s construction’.

Players are then asked to build a farmhouse so some peasants may be brought to the town to keep watch, and ease the load on the watchmen soldiers. A wheat mill is also requested so that food may be generated for the troops. Within the ‘Build’ option, players may elect to choose from four menus: Resource (things that produce resources), Military (assist in defence and attack), Misc (includes things that enhance power) and Décor (statues, roads, etc). Each time a player builds something, they receive rewards in the form of experience points as well as gold.

The game encourages spending money by incorporating very significant time lags in regards to building and undertaking activities. Some actions will take between minutes and hours to be processed to completion, but players can skip the wait by using money to purchase in-game crystals.

The app encourages players through a pop-up option to log into Google Play Game Services to enter their town and see Leaderboards and Achievements.

Female characters such as Sonja the Treasurer are dressed very provocatively. Conversely, the men are dressed quite conservatively in regal attire.

The game encourages spending of in app currency by incorporating very significant time lags in regards to building and undertaking activities.