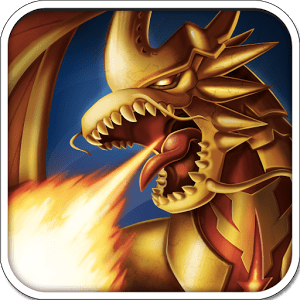 Knights and Dragons is a timer and quest role playing game based around mythical creatures and knights.

This review of Knights & Dragons was completed by the Australian Council on Children and the Media (ACCM) on 29 March 2015.

This review of Knights & Dragons contains the following information:

Knights and Dragons is an action RGP game that focuses on battles and timer-and-quest building. The objective of the game is to battle enemy monsters, whilst earning enough coins and gems to rebuild the castle with necessary structures. Within the game, players require limited skills – however, motor skills and knowledge of strategy would be useful.

When the app is first installed and opened, players are informed by a small blonde court wizard named Gwen that ‘Monsters have invaded the castle! Help us fight them off!’. After this point, they are taken to a battle screen that has lightning bolts all around the border for effect, as well as a knight and a creature who are facing each other. There is a large icon that says ‘Fight!’ in the centre of the screen – once tapped, the two individuals battle each other. They have a small green health bar above their heads, and with each blow, this can gradually decrease. Violence is not presented in a realistic manner – rather, there is an explosion of yellow light when one character is hit by another. The character that loses the battle disappears into another smoke of red light when they ‘die’. Players can then tap to collect the ‘Earth Shards’ and experience points that are earned as a result of the battle. Earth Shards are used to craft magical Earth Armour.

After this fighting tutorial is completed, players are able to customise their character’s name and appearance. They can select their skin tone, eye colour, hair style and hair colour. Players are then told by Gwen that they are the new Knight-Commander for the Capitol. The app also introduces other characters, such as Artie, the player’s squire and castle handyman. Players are informed that they should get started on rebuilding what the monsters destroyed – this involves tapping on certain blocks of land and building structures. This game has timer-and-quest features, and it is possible to skip the building waiting period by utilising green gems. Once structures are built, players can begin utilising them – for instance, they may use the Armour Smith to make improved and upgraded Earth Armour. Upgrading armour gives players more defence and attack points, but costs them money and Earth Shards. Players can also visit the Fusion Master in order to Combine (combine equipment to get new equipment), Enhance (enhance existing equipment) or Smelt armour (smelting armour for gold). Doing any of these tasks costs players some gold.

The game also contains a range of official Quests – these are brought to players via a message box. For instance, players receive a message from The Dark Prince, their nemesis, who informs them that he wishes to take over the castle. New areas are also unlocked as player’s progress through the game and level-up by building more things. The game also contains an Arena, which is level-locked until Level 5, as well as a Guild option that is locked until Level 11. These gameplay modes allow players to join their friends and play online, to play against their friends, and to battle other teams of players from across the world.

Players are then encouraged to play through the quests, defeating small monsters and larger bosses. Doing this enables them to use their special attack, as well as collect special items that are dropped when bosses are defeated. As players progress with their building and battles, they are able to enlist other knights to assist them in their battles – these knights will have different levels of armour, defence and attack.

The game contains a pop-up screen which appears and encourages players to ‘Refer a Friend’ via Facebook. Players will receive in-game rewards for doing so, in the form of upgraded armour. Players are also incentivised to simply log in and connect via Facebook themselves, in exchange for 30 green gems.

Players can additionally play through online modes of gameplay where they fight battles with their friends, battle their friends in player-versus-player, as well as play against other guilds internationally.

Players can receive free green gems by watching video advertisements for other external gaming apps (e.g. Game of War: Fire Age, DomiNations, etc) – these can be viewed by clicking on a small icon on the main page. These video advertisements are approximately 30 seconds in length, and cannot be closed or skipped until they have finished playing.

This is a role playing game app in which players battle enemy monsters to earn rewards.