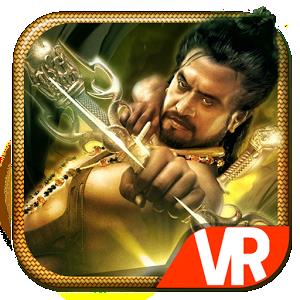 This review of Kochadaiiyaan The Legend, Kingdom Run was completed by the Australian Council on Children and the Media (ACCM) on 22 June 2014.

This review of Kochadaiiyaan The Legend, Kingdom Run contains the following information:

Kochadaiiyaan The Legend is an adventure side-scroller that involves the player avoiding obstacles by jumping or ducking, as well as killing enemies who they meet along the way. The objective is to play through each level and obtain as many coins as possible in order to purchase better weapons and armour. The skills required to play are predominantly related to motor skills and hand-eye coordination.

The app opens with a full-screen advertisement for an android launcher – the ad must be manually closed by clicking the X in the top right-hand corner. After this, players are bought to a Vroovy page which allows players to immediately login via Facebook or an official VR account. They may also elect to click the ‘Not Now’ option. During the loading screen, half the device screen is occupied by another advertisement. After this point, there is a banner advertisement along the top length of the screen that remains there.

From the main menu, it is possible for players to browse through their weapons, armour, powerups, and to also purchase coins from the in-app purchasing menu. Coins are required to purchase items from these menus, with better items costing more coins. The game also has a menu of Achievements that are unlockable – these include ‘Swift Kills: Kill 100 enemies’, ‘Ashes to Ashes: Kill 200 enemies using explosive barrel’, and ‘The Bow Reaper: Kill 200 enemies with bow’.

Players begin playing as a tall and very muscular man who has his chest and torso bare, and appears to only be wearing a tunic. The game is a side-scroller action arcade game, and players need to jump and duck in order to avoid hitting obstacles, in addition to either striking or shooting arrows at other enemy men. Players begin with three lives, and must collect coins along the way so that they may purchase extra lives if they die more than the allocated number of times. After completing a level, players receive the game stats of how many coins they collected, how many points they obtained from killing enemies, any scores for combo attacks, and a total score. Players may purchase defensive weapons that will, for instance, protect them from all types of obstacles.

The app has a message centre, where players may log in via Facebook and recruit their friends. It is possible to log in via Google+ also, and to add random players from browsing through a list of player usernames and IDs. Players may send their friends gifts or personal messages.

There are very frequent advertisements within this app, predominantly for other games/apps that can be obtained via the Play Store. They appear after the completion of every level – they are full-screen and must be manually closed.

Players run through the game as a tall and very muscular man. He is only required to kill male enemies, who are similar in appearance.