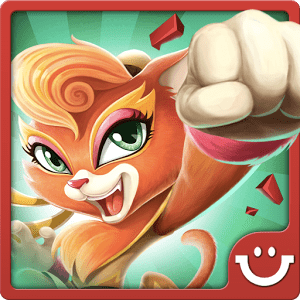 This review of Kung Fu Pets was completed by the Australian Council on Children and the Media (ACCM) on 27 November 2014.

This review of Kung Fu Pets contains the following information:

Kung Fu Pets is a quest-and-timer building app where players must recreate a town that was lost after a war. The objective of the game is to unlock and purchase pets, as well as rebuild the town by creating habitats and structures to keep the city running. There are limited skills needed, but an understanding of strategy and problem solving may be useful.

The app begins with an animation that introduces the storyline via text and images. The app takes place within a land called Xiaolin, where a ‘war raged’ and ‘ended with the noble sacrifice of the Kung Fu pets’. Players are told that one thousand years have since passed since that point in time. The animation ends, and players are asked in a small pop-up box if it is their first time playing. They are then instructed by an old talking crocodile to tap the screen where a Kung Fu ball is hidden inside a lotus flower. In doing so, players release Grandmaster Chen. Text appears on the screen stating ‘Thank you for freeing me from this thousand-year old seal! I’m Chen, the Grandmaster of the Xiaolin continent. You have my deepest gratitude, and in return, I’d like to show you around’.

Players are then brought to an overhead view of the town. The game states that the goal is to rebuild Xiaolin as the ‘glorious civilization’ that it once was before the war. This is done by first awakening a Kung Fu pet. Players are directed to the Shop, where they are able to purchase one of the pets for a small amount of gold. Before purchasing them, players are offered information on the gold rate collected by the pet per minute, their habitats, as well as the summoning time. Players receive a reward in the form of gold, as well as experience points, for doing this. They are then instructed to build a home for the pet. A habitat is built in the same manner, by accessing the shop and purchasing one with in-game currency. The building of habitats can take several minutes, or considerably longer. It is possible to skip the waiting period by utilising a red gem, which offers an instant finish.

Not only do players level up as they build more within Xiaolin, but it is also possible to level up the pets themselves. This is done by feeding the pets food purchased from the bistro. It is then possible to have battles with the pets within the arena. Players choose an opponent, as well as selecting which of their own characters they wish to use. Kung Fu pets take turns in attacking each other, and players must tap the Smack or Rockslide buttons in order to attack (both of these perform different attacks that do varying levels of damage to opponents).

Within the shop, it is possible to purchase many different categories of items. These include: Treasures, Kung Fu Pets, Habitats, Decorations, and Buildings.

Players also have the option of accessing News related to Kung Fu pets, and are encouraged via a pop-up to sign in via an email account if they wish to do so. This includes information on recent updates to the app, as well as other similar gaming apps that players might enjoy.

The game encourages spending money by incorporating very significant time lags in regards to building and undertaking activities. Some actions will take up to 24 hours to be processed to completion, but players can skip the wait by using money to purchase in-game clams.

Players are informed that if they log in with a Facebook or Hive account, they will receive two red gems for free as a reward. Players may add up to 150 friends if they log in. It is possible to invite new friends, or private message existing ones.

There are pop-up advertisements that appear occasionally, advertising the in-app purchases of the app itself. They are full-screen and must be manually closed, and contain a large ‘Black Friday SALE!’ image that offers a special deal on purchasing red gems within the game.

Time-lag features can be overcome with the use of in-app currancy which can be purchased through in-app purchases.