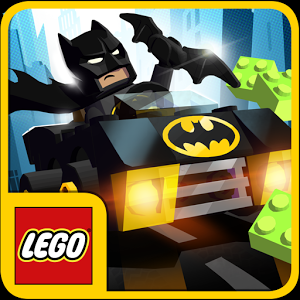 This review of LEGO DC Mighty Micros was completed by the Australian Council on Children and the Media (ACCM) on 1 May 2016.

This app was reviewed for approximately 50 minutes

LEGO DC Mighty Micros is a third-person racing game. The central objective is to advance through a racing track by driving it repeatedly, and collect plastic studs which are exchangeable for base upgrades. The skills involved in playing this app include motor skills and quick reflexes, as well as visual skills.

When the app is first opened, a screen is displayed where players can select from a variety of different DC characters. The player is able to select one of three characters, and then presses a large red button to proceed. The screen then cuts to an animated video depicting a vehicle chase – players are then taught how to utilise the basic controls. The player uses on-screen controls in the form of a slider to steer and fire projectiles from their vehicle. There is minimal violence, however, the projectiles which are necessary for gameplay are aimed at other non-player characters. Upon making contact, these characters spin around but remain unharmed. Upon completion of the track, players are given a virtual gift requiring an on-screen tap to open. Players unlock various new characters throughout the course of gameplay, which they can use to decorate their in-game ‘lair’. After completing the track each time, players are taken back to the interactive menu screen where they can use collected in-game currency to unlock various new items. These items include things such as a dance floor, a ball pit, etc – these are additional aesthetic features.

Players can navigate to an in-game movie cinema where they can elect to view advertisements for various games by the same developer (e.g. Lego Batman: Beyond Gotham, mild animated violence). These are optional, and players are not rewarded for watching these advertisements.

From the home screen, players can enter a level customisation screen, where they can choose their character, environment/setting, and difficulty in order to create their own customisable level. As players play through the track repeatedly, they unlock an increasingly varied range of background sceneries and villains. Within the app, there is a section where the player can read about the privacy policy, cookie policy, and terms of use of the app.

No: No in app purchasing found during this review.

No online information requests found during this review.

Within this app, players can choose to watch ads for other LEGO games for mobile devices. This is entirely optional, and players are not rewarded for doing so. Some of the apps advertised have mild violent content presented.

Mild animated violence is present in game play. No other game playing behaviour which may be of concern to parents was found during this review.