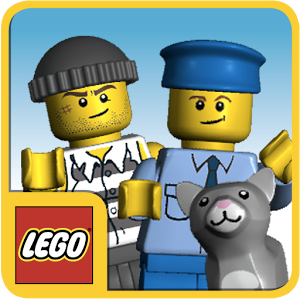 LEGO Juniors Quest is a story-based single-quest app that allows players to build structures and chase a robber through the town.

This review of LEGO Juniors Quest was completed by the Australian Council on Children and the Media (ACCM) on 26 June 2014.

This review of LEGO Juniors Quest contains the following information:

There is a single quest within this game, and this was played through to completion.

LEGO Juniors Quest is a story-based game that follows a police officer as he attempts to catch an escaped robber and find a young girl’s missing cat. The objective is to play through the scenario by building lego structures, as well as driving the police officer through the roads of the town. The skills required to play are spatial/visual in regards to lego building, and motor skills in relation to navigating the police officer’s vehicle.

The app begins with an interactive video, where players witness a criminal locked up in a cage within a police station who is trying to escape. Players must swipe across the screen in order to assist him in opening the locked door and destroying the holding cage. A police officer, witnesses and players are then encouraged to slide architectural parts across the screen in order to rebuild the police cage. Placing individual pieces of lego in their allocated place earns the player in-game coins, and also garners a cheer as background noise.

The police officer then gets into a car to go track down the escapee, and players tap either the right or left side of the screen in order to navigate the car through obstacles whilst also collecting coins scattered on the road. There are video segments along the way, where the police offer stops and talks to other individuals to help build different things out of lego. For instance, he comes across two builders who are trying to move a giant boulder out of the way – as a result, he assists in building a truck with a wrecking ball attached, and players may swipe across the screen to swing it and destroy the boulder.

After a car chase and eventually catching the criminal, players may swipe the bar at the bottom of the screen back and forth in order to shake the criminal up and down to collect the stolen gold. This completes the quest.

There is no way of pausing the app, as it is a single-quest game which players must complete in one sitting. The app does not pose any overt risks to children, and may provide a fun way of practice motor skills and basic reflexes/speed of touch.

No game playing behaviour which may be of concern to parents was discovered during the review.