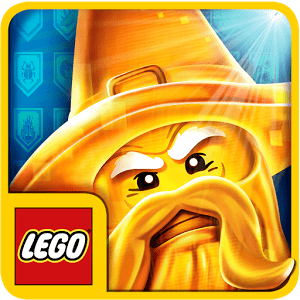 LEGO Nexo Knights is a combat based game

This review of LEGO Nexo Knights: Merlok 2.0 was completed by the Australian Council on Children and the Media (ACCM) on 9 April 2016.

This app was reviewed up to level 6.

LEGO Nexo Knights is a combat-based gaming app. The central objective is to complete missions within which players must battle opponents, thereby gaining rewards to upgrade their skills and armour in order to become more powerful. The skills involved in playing this app include motor skills and reflexes, as well as decision-making and timing.

When the app is first installed, players are taken to a home screen where they can click anywhere and ‘tap to play’. After this, an animated video is shown – various lego characters are seen preparing for battle. They discuss powers such as ‘Exo Scare’. Players are then required to tap an orange button in the top right-hand corner of the screen which triggers another animation. Players are then put in control of a small lego character named Clay, from an overhead view. He is in the middle of a grassy area, and players can tap anywhere on the screen to make Clay move to the location they want. There is a green health bar in the top left corner for Clay also.

Once they cross a bridge, players run into a group of small enemies named globlins. Players then tap on the creatures repeatedly, and are able to watch as Clay uses his large sword to strike them. No blood is shown, but the globlins eventually evaporate into the air and disappear, symbolising that they have been killed by Clay. Players are also able to use stronger power-up defences, which will affect multiple enemies at a given time. Players are also able to charge up for stronger attacks

They then encounter an evil villain named Jestro, who was responsible for sending the smaller creatures. Jestro comments that he ‘loves sounding all evil and angry’. Players then must fight larger, more complex enemies – such as creatures that repeatedly throw explosives at them during battle. In such instances, players must tap the screen to ensure that Clay moves out of the range of the explosions when they go off, must then quickly return to attack the creature at opportune moments. They have their own individual health gauge that players can view progressively reduce as they attack them. After battles are done, small chests appear and offer players rewards.  After each individual mission is completed, a screen appears which states ‘Mission Completed!’, and contains the amount of experience points players have gained, as well as a number of reward pieces of blue lego. These blue pieces of lego can be used later in the game to purchase in-game upgrades (e.g. an improved, more defensive helmet). Each item costs a set number of lego pieces to upgrade.

Players are told that they’ll need to find their peers, the other Nexo Knights, in order to defeat Jestro. The game allows players to store powers within a Nexo Power System – they are stored as small cards, and there are 171 powers to collect within the app. Each power is obtained by completing a quest – these are level-locked and must be made available progressively as individuals play through the game. Nexo powers can also be scanned in via the device’s camera – the images required to do this can be found on the website, as well as on purchasable merchandise. Scanning powers increases the power that players have within the game, and also enables players to battle with friends.

There are other modes of game-play, such as individual battles where players can test out their new powers separately – these battles are infinite, and will continue until players run out of health or manually exit the arena.

The game continues with a storyline regarding the Nexo Knights fighting the evil Jestro, with players being required to complete missions in order to earn nexo powers.

No in app purchasing.

Players are able to battle with friends, if they use their device camera to scan the power card from another individual's device.