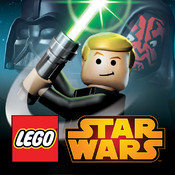 This is a saga game, based on the movie series. Caution mild cartoon violence

This review of LEGO Star Wars: The Complete Saga was completed by the Australian Council on Children and the Media (ACCM) on 25 February 2014.

This review of LEGO Star Wars: The Complete Saga contains the following information:

Episode I was reviewed, other levels must be purchased,

This is a saga game, based on the movie series.

In this game, the player can journey through the six episodes of the Star Wars saga and play out scenes from the movies. The characters are all made of LEGO.  Each episode is divided into 6 sections. The game currency is called studs (which look like small round LEGO blocks). Players move around the scenes destroying the enemies and collecting studs and “minikits” (which are more challenging to find). Studs can be used to purchase characters and helpful extras (once the Store has been unlocked as an in app purchase). Players may have to change characters to defeat some enemies or overcome challenges, as they have different strengths. The player has four lives. If the player is shot or injured, they lose lives. If they destroy their enemies, they can gain lives. When the lives run out, the player’s character breaks into pieces and they lose studs. They then re-appear, fully rebuilt with their four lives restored. When players complete a section, they receive new characters and spacecraft.  Players first play in “story” mode, which fairly closely resembles the movie. Players can unlock “free play” mode, which has a wider selection of characters to choose from by buying other episode packs.

There is currently no option for online or co-operative play.

There is a scene where Princess Leia is a Jabba the Hut’s slave, in which she wears a skimpy outfit.

Players can destroy random objects, just to see if they contain studs and sometimes lives or other useful items.

Violence and scary material:
There is a lot of mild cartoon violence. The player is regularly under threat or attack. Characters fight with light sabers, guns and other weapons. When defeated, the LEGO characters break up into bricks. The Emperor can electrocute his opponents. Sith Lords can force-choke opponents, who then explode into LEGO pieces.