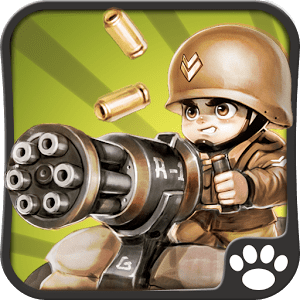 This review of Little Commander WWII TD was completed by the Australian Council on Children and the Media (ACCM) on 4 June 2015.

This game was played and reviewed for approximately 1.5 hours

Little Commander is a strategy combat game that allows players to build a defence force to battle enemy troops. The objective of the game is to place soldiers and weaponry down along the path of invasion, in order to stop enemy troops from reaching their destination. There are limited skills needed, but strategy, visual and motor skills assist in gameplay

When the app is installed, players are brought to a home menu page containing options to Start and Upgrade. Upon clicking the Start option, players are shown a map that is labelled ‘Level 1 Boot Camp’. They have the option of choosing a difficulty level (from Casual, Normal, and Hell), are told how much starting cash they have available ($50), as well as how many Lives and Waves they have (30 respectively). Players must then opt to choose a Mode from: Normal, Endless or SingleLife.

The game then offers players a tutorial. They are shown a top-down view of a field, and are told to press and drag the icon to the battlefield in order to build a turret. Money can be used to build turrets, and it is possible to click a Fast Forward option in order to speed up the game. The Screenshot button can be utilised to capture a picture of the battlefield. The game can also be paused at any time. During gameplay, players can place soldiers or weaponry along a path where enemy soldiers continue to appear in ‘waves’. They have the option of placing single soldiers with weaker or stronger guns, or can create large-scale destruction by using overhead places that have large missiles. Players can upgrade the weaponry of their soldiers by utilising in-game money. Upgrading and placing more soldiers becomes necessary as the waves move quicker and contain more enemy troops. The game is quite violent, containing imagery of enemy vehicles exploding, troops being killed (with blood shown and sound effects of injuries and death being verbally displayed also), etc.

Players receive money each time enemies are defeated, and can use this throughout the gameplay to increase the strength of their defences. After level one is completed, a Mission Accomplished pop-up screen appears which demonstrates the statistics of enemies killed (these stats are broken down into soldiers, armoured soldiers, trucks, larger vehicles and planes).

Players are able to take snapshots of the battlefield during gameplay, and are then able to share this with friends on social media websites.

This game is violent in nature.  The app includes representations of blood and yells of pain in its animated battle scenes, as well as enemy characters dying and disappearing once they have been defeated in battles.