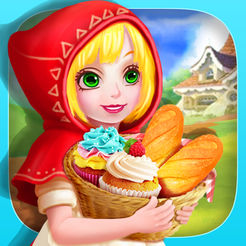 This app is primarily a cooking game inside of the Little Red Riding Hood story. Most children would be able to navigate this game quite easily. Parental guidance for children 12 and under due to age inappropriate advertising.

This review of Little Red Riding Hood Food Adventure was completed by the Australian Council on Children and the Media (ACCM) on 6 September 2018.

As Little Red Riding Hood, players must make a cup cake and bread to take to grandma’s house. Ingredients are placed on a table and players must drag and drop them into a bowl and then mix with a spoon. Cupcake mixture and bread dough are then poured into trays and placed in the oven. Players can then decorate their baked goods by dragging and dropping from the selection list (e.g. for cupcakes, you can choose bases and toppings). The game then leads the player into a scenario where Little Red Riding Hood is chasing the big bad wolf with a big stick. Players must tap on the screen to jump over obstacles until the wolf is caught and hit over the head with the stick (this action is not seen, but only implied by the wolf laying down with dizzy signs over his head). Players then make it to grandma’s house and eat the food by tapping on it until it’s all gone.

The above description of this game describes it in full – there is nothing further to do in the app – other than purchase new items to decorate your cupcakes and bread with. Parents need to be aware of the amount of ads in this app. There is a permanent banner ad at the bottom of the screen (which shows ads for quitting smoking, slot machine games and many other age inappropriate things). There are also full screen clip ads in between stage transitions – these were mostly for other games. The age recommendation by the developer on the iTunes website states: “Rated 12+ for Infrequent/Mild Simulated Gambling”. However, there was nothing in this game to indicate any gambling whatsoever – thus they must either be referring to the ads or it was placed there in error.

Only in some banner ads.

A permanent banner ad and full clip ads in between screen transitions.