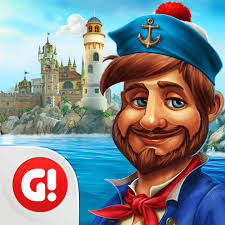 This app is a SIM style game where players must construct and maintain a new city. Fine motor skills required to play. Caution: there are gambling elements in this game and therefore it is not suitable for children 12 and under. Parental guidance for children aged 13 – 15.

This review of Maritime Kingdom - Trade goods, fight pirates, build an empire was completed by the Australian Council on Children and the Media (ACCM) on 11 September 2017.

Maritime Kingdom is a SIM style game set in the old days of pirates. The game begins with the rescue of Princess Beatrice – who then offers you the job of being mayor of a new city, which is yet to be constructed. This involves managing agriculture, building town houses, shops, roads and ships etc. The game guides the player through these tasks and therefore game-play is relatively simple. Coins and crowns are earned through accomplishing tasks. Crowns are used to level-up and coins are used to buy various items that help you to build and maintain your city as well as go on expeditions and build ships. The aim of the game is to build a city and army capable of rescuing the King.

As with many of these SIM style games on the market, you begin with a number of gems or crystals which can be used to unlock certain items and features (and to speed up processes such as building ships etc.). However, these crystals quickly run out and game/level progression becomes very laboured and slow – and this often happens when players are on the verge of an important part of the game’s story or level progression. Many children may not have the patience to wait for the game’s timers (e.g. to build a new ship in order to go on the needed expedition, you may need to wait for a 2 hour timer before the ship is ready to go) and hence children may opt to speed this process up by using or buying more crystals. The cheapest package only gives you 200 crystals at a cost of $2.99. These can be spent very quickly, putting the player back into the same position that they were – not being able to progress without waiting for a substantial amount of time. Furthermore, there is a section within this game which features a prize wheel. At a cost of 5 crystals, players can spin the wheel in order to win certain objects which can be used in the game. Contrary to other games, there is no limit to how many times you can consecutively spin the wheel (as long as you have enough crystals). The presence of this wheel is not visible by name or icon – it only pops up when you press one of the ships in the port. Although there is a prize won on every spin, it may be an object that you have lots of, and hence still represents risk for reward and is indicative of gambling type of behaviour.

Pop-up ads occur occasionally with offers of downloading other games in exchange for items that can be used in this game.

Gender stereotypes of older eras feature in this game – particularly indicating that women are weaker than men and are not capable of leading.