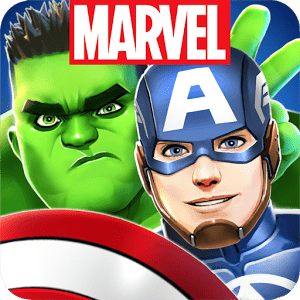 Marvel Avengers Academy is a timer and quest building app

This review of Marvel Avengers Academy was completed by the Australian Council on Children and the Media (ACCM) on 18 March 2016.

This review of Marvel Avengers Academy contains the following information:

This app was reviewed to level 8

Marvel Avengers Academy is a timer-and-quest building app. The central objective is to build as many different components of the Academy as possible, and to recruit and train more superheroes to battle against the evil villain Hydra. The skills involved in playing through this app include motor skills and decision-making.

When the app is first installed, a pop-up window appears asking players to log-in via a Google+ account. Players are also given the option of linking their game data with their Google Play account, in order to access their save file across multiple devices.

After this, a short animated video is shown. It begins with the Marvel character Iron Man answering his phone as ‘Handsome genius speaking’ – he is told about the Avengers Academy, which aims to ‘train young heroes to fight the forces of evil’. Iron Man then states that it is ‘time to save the world!’. After this, players are taken to an overhead view of a park where three characters, including Iron Man, Academy Administrator Pepper Potts and the Academy commander Nick Fury, are waiting. Players are encouraged to tap on Iron Man and begin a conversation, being told that ‘Hydra is about to launch their ultimate assault, so we need to quickly build up the academy and get everyone trained to fight.’

After this, players are encouraged to select an action and ‘find the best spot’ to begin building. To do this, players click and drag Tony Stark’s Iron Man boots onto his feet, and his character then proceeds to find a location within the complex to place Stark Tower. Players can watch as the tower is placed, and subsequently constructed. It is possible to utilise Infinity Gem Shards to speed up time within the game, and these can be used to instantly recruit new heroes or to build structures more quickly. Players are encouraged in-game to actually utilise gem shards to speed up the processing time – e.g. ‘Let’s save Tony’s ego and use gem shards to instantly finish his action’.

At various points, players speak with and fight the villain of the game, Hydra. When he arrives, he tells Tony that ‘A bunch of us are about to come tear this place apart’. Later on, he comes to the Academy to attack the heroes – there is some mild violence, but no blood is displayed.

Players are able to invite new heroes from the store who will help fight with them – these are level-locked and must be progressively unlocked by advancing within the game. Some of these heroes include Loki, The Black Widow, Falcon, Captain America, etc. They all have varying degrees of skill.

When players complete actions/missions, they gain experience points which bring them closer to levelling up – once this happens, players are able to access newer buildings and abilities, as well as gain rewards in the form of in-game gold coins and Gem Shards. Players have the option of using real-life currency to make in-game purchases in the form of gold coins and gem shards. Each of these items can be purchased in packages priced $2.82, $7.07, $14.16, $28, 36, $70.92 or $134.16. These items are utilised within the game to speed up building time, as well as upgrade characters and buildings.

As the game continues, players must build a functional academy with places to train (e.g. a Blasting Range, where ‘disintegrating the target is the only bullseye that counts’). When the in-game characters learn how to fight, players witness these animations – small explosions are given off, and sparks fly when the targets are hit. The characters also discuss times when they were injured and ‘almost died’ during training sessions that went wrong – no graphic details are given during these conversations.

Players are additionally able to buy upgrades for their character’s armour, giving them more defence and power. As the game progresses, players continue to recruit more heroes and build additional components of the Academy – these include things such as a weapons forge, a clothing store, a stadium, a dorm, etc.

The game incorporates strong male and female characters, with characters such as The Black Widow representing women who possess equal physical strength to the male superheroes. However, she is presented in a much more sexualised manner – tight-fighting red and black clothing, with a very small waist and long, thin legs. She is also the subject of flirtatious dialogue from other characters, with people like Tony Stark asking ‘Who are you? What’s your phone number?’ immediately upon meeting her.

Despite their physical strength, other female characters are often quite stereotypical also. The character Wasp requires a new phone when she joins the ranks of the Avengers, and upon receiving one, subsequently states ‘Now I need a new purse to match my new phone!’. Her first action within the game is to take photographs of herself in the academy, whilst stating ‘I know how to make an entrance’.