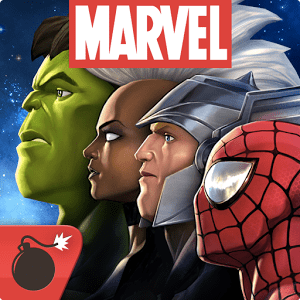 This review of Marvel Contest of Champions was completed by the Australian Council on Children and the Media (ACCM) on 11 March 2015.

This review of Marvel Contest of Champions contains the following information:

This review focuses on levels 1-6.

Marvel Contest of Champions is a turn-based combat game. The objective of the game is to unlock as many Marvel heroes as possible, and these characters may be used to battle opponents. The skills required are motor skills, as well as quick reflexes and timing skills.

When installed, the app requests that players sign in via a Google+ account in order to play. There is a comic book-style animation, where multiple Marvel characters are seen to be looking for an item that is both difficult to find as well as hard to secure. Characters are labelled ‘Champions’, and ones such as Deadpool, The Hulk, and Gamora are all mentioned as ‘Status: Capturing’. Players are then told that they themselves have been chosen to represent Earth in a cosmic Contest of Champions against Kang the Conqueror. Winning battles results in ‘untold power’, whilst losing will lead to players being ‘placed in a collection permanently’.

Players are instructed that they must first master the basics of combat. In order to play, they place both hands on the sides of their device. Lightly tapping the right side completes a light attack, while swiping right creates a medium attack. In order to block, players must press and hold on the lefthand side of the screen. Pressing and holding on the righthand side creates a heavy attack that can break through an opponent’s block. Players may also swipe left to dodge attacks, or swipe right in order to dash forwards. After completing a few attacks, players gain enough power to enact a final Special Attack that causes a large amount of damage.

Upon winning a fight, players receive 50 units of silver – these units can be used to purchase Champion crystals from the Collector’s vault, from which the Champions themselves are hatched and retrieved. Fights are quite physical and involve considerable animated violence – the Champions fight with weapons (e.g. Thor’s large hammer) and beat each other with kicks and punches. The violence appears to be quite glorified, as once the opponent falls dead, the winning Champion has a small cut scene where they flex their muscles or display general pleasure at having won.

Players utilise their coins to unlock more and more Champions, such as Spiderman and Hawkeye. Before a fight, players are shown their opponent, and given statistics on both their and their opponent’s levels of defence and health. They may choose to fight with any of the Champions that they have on their team. After a player wins a fight, they are given gold as well as Experience Points. Gold can be used to upgrade current Champions. It is possible to upgrade, inspect, or sell any of the collected Champions.

In regards to the battles players can engage with, they have the option of choosing from Story Quests (battles that form part of an ongoing storyline), Special Events (time-limited, unique events – a  place to rank up Champions) or Versus (a place where you can enter multiplayer battles with other individuals also playing the app).

This app encourages players to join the alliance for access to chat. By choosing a username and joining or creating an Alliance, players gain access to chat with other players. This chat function appears to be unmoderated and may pose a potential risk. The app also has a multiplayer component, where players can battle against other individuals who are using the app.

Although the app functions as an advertisement for the Marvel Comics and feature films involving these characters, there are no external ads that advertise other children’s apps.

Women are presented in  a sexualized, stereotypical way. The male heroes are very muscular.