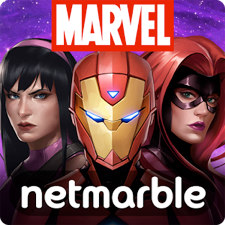 Marvel Future Fight is a multiple platform game where the player’s chosen team of superheroes combats either the computer or other real players. Good hand-eye co-ordination and gross motor skills required to play. ACCM recommends parental guidance for ages 13 – 15 due to online connectivity, in-app purchases and violent game play.

This review of Marvel Future Fight was completed by the Australian Council on Children and the Media (ACCM) on 26 January 2017.

This review of Marvel Future Fight contains the following information:

Marvel Future Fight allows players to select existing Marvel superheroes to create a team, which can be used in multiple missions and formats. The player competes against the computer and/or other players online in order to progress through missions and levels.

Each mission begins with a main superhero and two other team members that can be tagged in one at a time. Levels are completed by defeating all enemies and a big boss superhero at the end, which unlocks that character for you to use in further fights. Players are also rewarded with a 3 star rating system, experience points, crystals and gold coins at the end of levels.

Each superhero has a basic attack button and 2 special move buttons. Direction of movement is controlled by the player using a virtual joystick left of screen. Basic gross motor skills and good hand/eye co-ordination skills are therefore required to play.

This game not only has multiple avenues in which to connect with other players online (Facebook, Game Centre, etc), but the game often encourages this. For example, at the end of each mission level, a pop-up box appears and states: “Would you like to send a friend request to (another player’s online name)”. Players can also connect through 1000 different channels in which real time conversations are possible. Links to other websites can be broadcast in these chat rooms.

There are also many in app purchases that can be made in this game. Many of these are quite expensive (see app purchase list) and/or require a high number of virtual gold coins and crystals (which can also be purchased with real money).

ACCM does not recommend this game to children under the age of 13 due to online interactivity.

ACCM suggests that if children aged 13 – 15 are engaging with the chat rooms in this game, that children are either informed or reminded about safe online practices and protection of personal information and well being. ACCM recommends parents learn about and engage at some level with this app.

Online information required to play and interact with the app includes:

Tight clothing worn by some of the female characters may be interpreted in a sexual manner and therefore parental guidance is recommended.

There is a high level of violence in this app, which might concern some parents. In addition, as noted above, parents may have concerns about younger children engaging with the chat room function.