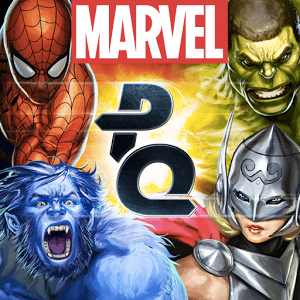 This review of Marvel Puzzle Quest was completed by the Australian Council on Children and the Media (ACCM) on 8 May 2015.

This review of Marvel Puzzle Quest contains the following information:

Marvel Puzzle Quest is a match-making puzzle game where players just connect items of similar colours (in groups of 3 or more). The objective is to play through the multiple levels of increasing difficulty, matching increasing numbers of same-coloured and same-shaped items, in order to make their Marvel hero characters battle enemies. The skills required to play are spatial/visual, hand-eye coordination, lateral thinking, and problem solving.

When the app is opened, players are presented with a pop-screen asking them to sign into a Google+ account. Players are then taken to the game itself, where Marvel characters (such as Iron Man) can be seen in the top portion of the screen, whilst a collection of random shapes of different colours are presented in the bottom portion. Players are then told to ‘ATTACK! Create three in a row to attack’. This is done by clicking on one of the small shapes in order to swap its position across one block, in order to make sets of three. Upon clicking on an item, there are text-based references to the Avengers characters, such as ‘Thor shatters to deal 10 damage’. Players can also match four items in a row, as long as they are the same shape and same colour. The game also contains critical tiles – ‘A 5-match creates a Critical tile, which can make a powerful match of any colour.’ As players go through and match tiles, they can see a representation of the Marvel characters battling above. The characters facing each other will have small explosive sparks fly over them, and cause their health points (or the health points of the opposing side) to drop. The Avenger will then move back into the team, and another hero will take their place in the battle. The game also contains special attacks, such as a Repulsor Blast – this is unique to Iron man, and causes a high-impact kinetic blast from Iron Man’s hand to deal 63 points of damage to the target. In addition to this, enemies can place Countdown tiles which, once clicked on, display information on how that enemy is planning to attack  (e.g. ‘Destroy this tile within 5 turns to stop an enemy attack. The Tough Guy pops off a quick shot, dealing 20 damage’). Once the Marvel team defeats their enemy, a congratulations pop-up appears before the next level starts.

After this introductory battle, players are asked to tap on the Mission Map to select a mission (e.g. ‘Iron Man has spotted a Maggia handoff about to happen in Central Park. Take care of the lookouts!’). Players are shown the enemy they will be required to fight, as well as the level of the enemy. They are then given the opportunity to assemble their own team of Marvel heroes – they can choose their heroes based on stats such as health, level, experience points, etc. Players can increase the health of their heroes by utilising in-game coins (e.g. a single life for 50 coins, or a 5-pack of lives for 200 coins). These coins can be purchased within the in-app purchases store for real-life money. At the end of certain missions, players receive a new Marvel character. For instance, they can receive and recruit the character of Storm from X-Men. However, players must pay to expand the limit of character slots, as the game only allows for a set number of newly obtained cards to be kept at any one time – this very strongly encourages in-app spending.

The game has 11 missions to complete, and 25 rewards that can be earned through the process of working through them. Players can ‘harness the power of the ISO-8’ in order to upgrade their Marvel team heroes also, increasing their stats and unlocking new abilities and special attacks for them.

Players are also able to play against friends within the Tournament mode of the game. There are ranking boards for top scoring players, and individuals also have the option of joining/forming an Alliance with other players who may be known or unknown to them.

Yes: Players can purchase a range of in-game items within the Resources stores of the game, using real-life money. This includes purchasing packages of coins for $2.49 for 200, $6.49 for 600, $24.99 for 2900, $64.99 for 8500, and $129.99 for 20,000. Players are able to buy similarly priced packages of purple gems. In addition to this, players can pay to expand the limit of character slots, as the game only allows for a set number of newly obtained cards to be kept at any one time – this very strongly encourages in-app spending.

Players are encouraged to connect via Facebook and invite their friends. Players are also able to compete and battle against friends within Tournament levels, and join collective alliances that can fight together.

The character of Storm from the X-Men franchise is displayed in a highly sexualised manner. She is wearing a tight-fitting leather costume.

Frequent fantasy violence is present however this is not directed by the game player.