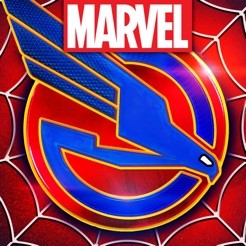 This app is a level fighting game. Players will benefit from having good strategic planning and reaction time skills. Not suitable for children 12 and under, parental guidance 13-15 for social media connectivity, cartoon violence and in-app purchasing.

This review of Marvel Strike Force was completed by the Australian Council on Children and the Media (ACCM) on 22 August 2019.

This review of Marvel Strike Force contains the following information:

Marvel Strike Force is a heroes vs villains fighting game, featuring popular characters from the Marvel Universe (Spider-man, Ironman, Hulk, Phoenix, etc.). Players control teams of heroes (from 3 to 5 members) to battle groups of villains. The game will choose the order in which each hero attacks. Players then need to select between 2 attack buttons, and which villain to target – the noted hero then carries out the chosen attack. The aim of the game is to co-ordinate your team to beat the villains before they beat you.

The main concern for parents is that once players progress to level 6, the game opens a feature whereby you can join alliances and communicate in real time with other online players. Also, the fighting – even though in cartoon style – is quite graphically violent. Progression past some levels may be quite difficult and (in some cases) not possible until upgrades to players have been made. This may not only upset some players but may lead them to purchase upgrades with real money.

This game has some online connectivity, such as:

As Spider-man is the lead character (at least from the start of the game) this may encourage children to want to see the movie:  Spider-man; Far From Home – which is rated “M” in Australia (15 years and older). The developers of this game recommend 12+.

None noted. In fact, the most powerful character is female; Phoenix.