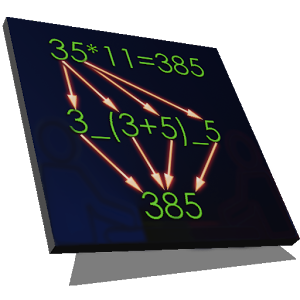 This review of Math Tricks was completed by the Australian Council on Children and the Media (ACCM) on 25 September 2014.

This review of Math Tricks contains the following information:

This review focuses on levels: 1-5 of 5 different categories.

Math Tricks is an educational app that allows players to work through mathematical equations from a wide variety of math topics. The objective of the game is to unlock as many levels as possible by working through the equations, utilising skills such as addition, subtraction, division, etc, in order to progress. There are many mathematical skills involved in playing through this app, spanning the subjects of basic addition and subtraction, as well as more complex calculations involving square roots. It offers players the opportunity to practice basic arithmetic, and to see if they improve not only in their efficiency, but also in their speed at working through the questions.

After selecting a language, players are brought to a page that allows them to select from a Single Game, Training Mode, Joint Game, or ‘By Heart’.

Within Training Mode, players can choose from the following options: Addition, Subtraction, Multiplication, Division, Squaring, Exponentiation, Square Root, and Percentage. Within each of these categories exist subcategories – for instance, under Subtraction, players may choose from ‘Subtracting from 1000’ or ‘Subtracting numbers close to hundreds’. The app then proceeds to demonstrate and describe how subtraction occurs, showing players that it is easier to round numbers such as 92 up to 100, before subtracting them from other digits. Players are brought to a list of boards after this, which one level unlocked and others level-locked and available only when players progress through the game. Upon starting an actual gameplay session, players are provided with equations that they must solve (e.g. 162-101=____). There is a keypad with numbers on it, and players must touch the screen in order to enter the correct numeric answer. There is a small bar that stretches along the length of the screen that represents the time players have left to enter the correct answer. If a player gets an answer wrong, they are told what their score was and the answer of the correct solution.

Within Joint Mode, the device screen is divided into half – each half is the same, only a mirror version of itself so that two people may hold the device and play on opposite ends of the screen. The format is the same, with each player being given a formula and needing to type in a numeric answer within the 15-second time limit. They are then given a score and also offered their Total as well as Highest Scores.

Within Single Game mode, players may choose from the Speed Challenge, Minute Challenge, and To The Bitter End. Each of these options offers a different game play experience whilst still being based on answering formula questions. The Speed Challenge tests how quickly players may progress through questions, the Minute Challenge trains players to more efficiently complete as many questions as possible within a short timespan, whilst To The Bitter End involves continuing with the questions in a longer-term capacity.

There is considerable educational capacity within the app in relation to basic and complex mathematical processes, making this app a potential learning tool. There are no in-app purchases, although there are multiple advertisements.

It is possible to sign in via a Google+ or Gmail account in order to play through the app. However, players are not enticed to do this by the game offering rewards or extra features.

There are banner advertisements along the bottom of the screen – some are for other external apps, whilst some are for websites such as BodyandSoul and promote weight loss/signing up to various newsletters and webpages.