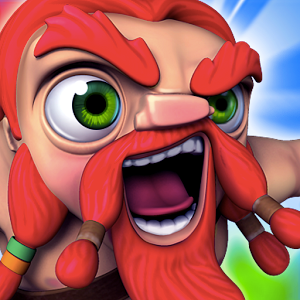 This review of Max Axe: Quest for Loot! was completed by the Australian Council on Children and the Media (ACCM) on 28 April 2014.

This review of Max Axe: Quest for Loot! contains the following information:

Max Axe: Quest for Loot! is an animated arcade runner where individuals play through various levels of increasing difficulty. The objective of the game is to throw axes in order to both collect loot, as well as kill any enemies that appear. The skills needed centre mostly around reaction times and motor skills.

Players take on the role of Max, a mad barbarian who is on a quest for complete destruction and mass loot-collection. The game involves sliding a finger across the screen in particular patterns, to destroy slime or collect coins, etc. It is possible to throw several axes at once, in different directions. Players are encouraged to go for the biggest combinations possible. Players receive a ‘Ridonkulous!’ or ‘Cramazing!’. After ‘slaying a slime’ for the first time, players receive multiple rewards: in-game currency, which is listed as ‘Money money money!’, as well as unlocking a ‘Rusty Bucket’ and leveling up to level 2. Players are then given the choice to spend money on equipping the Rusty Bucket as a helmet – this will offer them protection and defence, and assist them in lasting longer within each level. There are more helmets to unlock after this, which offer increased health as players progress through the game (going all the way up to the King’s Crown, which is unlocked at Level 22). In addition to upgrading armour, it is also possible to improve axe speed, the damage caused when the axe is thrown, the range that the axe covers, as well as how much power magnets have within the game.

Within each level, players can collect Rez Tokens that help to raise the dead when your health declines. In order to level, players need to achieve set goals – this involves things such as playing through the level 5 times, killing 5 slimes, travelling 500m in-game, etc. Enemies (such as slimes) get progressively harder and more diverse as a player levels, requiring multiple axes to be thrown at them instead of only a single axe. As players level, they also unlock new areas and environments. They are also termed different things, such as ‘Feral Hooligan’ or ‘Plundering Hun’.

It is additionally possible to collect items within levels such as Dice – these allow players to roll them and, within a game of chance, win either extra gold or another chance at reviving their character once they die.

The game advertises in-app purchases, calling them ‘Deal o’ The Century’ in large text which flashes red, yellow and white – this particular package includes 70 Rez tokens as well as 350,000 gold. There are also ads for other games and apps that pop up and must be manually closed throughout the app. In addition, players will receive 2,000 gold/1 Rez Token if they watch a video – these videos are 30 second advertisements for other games and apps.

However, buying anything from the store allows players to remove all of the ads within the app.

There was no game playing behaviour which may be of concern to parents discovered during the review.