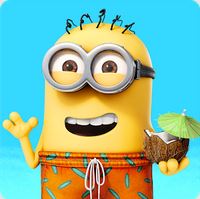 Minions Paradise is a timer-and-quest app.

This review of Minions Paradise was completed by the Australian Council on Children and the Media (ACCM) on 4 May 2015.

This review of Minions Paradise contains the following information:

This app was reviewed up to level 8.

Minions Paradise is a timer-and-quest game based on the Despicable Me films. The objective of the game is to gradually build different structures and turn the empty tropical island into a paradise for the many minions, collecting coins and experience points along the way. There are limited skills needed, but motor skills and creative thinking may prove useful.

The game is based on characters from the children’s animated film series, Despicable Me. When the app is opened and installed, players are presented with an animated cut sequence showing a large bunch of minions on a fancy cruise ship having a lovely time. However, the ship hits a rock as a result of one minion’s mistake, and they all quickly swim to a small tropical island nearby. Before beginning the game itself, players are asked to verify their age and agree to their terms of service and privacy conditions. From this point, they are asked to sign in via a Google+ account before continuing.

Players then begin gameplay – they are presented with a small yellow minion who states ‘What are you waiting for, Phil? Your buddies are furious and they’ll be here any minute! Since you ruined their vacation, it’s up to you to save it! You single-handedly sank a boat, so you can do anything! You’ll just need something fun!’. Through this, players discover that they were the minion which caused havoc on the boat and caused the group to be stranded. Players are then taken to a screen where they are instructed to click on a particular location on their map – in doing so, they place/build a ‘tiki lounge’ where smoothies can be made. Players obtain experience points in building this, and are told that they have earned rewards in the form of coins called Doubloons, as well as 3 new minions as friends. Players then watch as their three friends arrive and utilize the tiki lounge. Players are able to utilize their friends in order to help speedily build new structures in order to create the ultimate minions paradise. The dubloons earned with each levelling up also allow players to double their building speed by cashing them in, in a timer-and-quest manner. When buildings are finished in their construction, players may tap on the rewards hovering over their image in order to collect them.

Players continue to engage in these small quests as they build up their paradise for other minions, collecting experience and item rewards as they do. Players may select orders to fill from the Minions Board in order to earn more sand dollars, and therefore have the income to build more interesting structures. For example, some orders are as simple as ‘Greet Stuart with a welcome basket’, whilst others are more complex and involve construction. When it comes to building, players can opt to make things such as Coconut Grove or Gaseous Swamps, whilst other options for builds are level-locked at higher levels. Players are also able to make weapons, decorate areas with signs and items such as torches, as well as place leisure objects such as volleyball nets and a hammock for power napping.

It is possible to log in via a Facebook account in order to connect with friends online – this allows players to gather items and work together as a team.