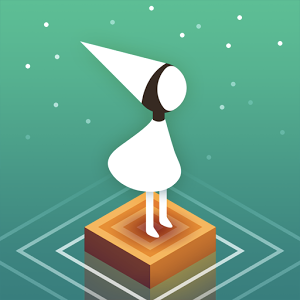 A puzzle game based on architecture and geometry. Caution: in-app purchases

This review of Monument Valley was completed by the Australian Council on Children and the Media (ACCM) on 8 December 2014.

This review of Monument Valley contains the following information:

Monument Valley is an app that centres on the manipulation of architecture. The objective is to play through the multiple levels of increasing difficulty, within which players must change the geometric paths in order to lead the princess from one point to another. The skills required to play are spatial/visual, lateral thinking, and problem solving.

The app opens to a modern-style screen with a small line of text stating ‘Tap the path to move Ida’. The screen displays a small female character, standing in amidst a square-shaped piece of architecture. Upon tapping the screen, the female character walks rapidly to the place players previously tapped. Text then appears that instructs players to ‘Hold and rotate’ – users may drag and move parts of the architecture. In doing so, players may change the shape of the path in mathematically impossible manners. The app contains quite soothing background music to accompany the graphics.

After this, players are asked if they would like to sign in via Google+. A player may sign in, or select ‘Not Now’. They are then taken to a title menu screen containing new chapters listed in the form of a spinning graphic with roman numerals. The chapters are all level locked, and must be accessed chronologically after one level has been completed.  Each chapter has a title – for instance, Chapter two is called ‘The Garden: in which Ida embarks on a Quest for Forgiveness’. Each level represents a stimulating geometric puzzle, wherein players must utilise their knowledge of geometry in order to transport Ida to the places necessary to complete the level. It is possible to move certain parts of the path, but only when Ida is not standing on them. It is conversely possible to move certain platforms within the multi-level environments when Ida is still standing on them. These platforms move horizontally and vertically also. Stepping on certain blocks and objects will move other areas of the design, creating staircases where none previously existed, or causing other aspects of the path to alter. There are other characters that greet Ida within various levels – for example, ‘crow people’ appear that make crowing noises when players direct Ida to walk past them. These people are used as obstacles within the game, as Ida may not pass through a certain area while a crow person is standing in her way. It is also possible to make Ida walk upside down and sideways across the screen, as well as to spin the perspective of the entire environment.

When each chapter is completed, players are given a small sample of text to further the storyline. For instance, one such quotation is: ‘This was the valley of men. Now all that remains are our monuments. Stripped of their glories. Thieving princess, why have you returned? Those who stole our sacred geometry have forgotten their true selves. Cursed to walk these monuments are they. Foolish princess, have you forgotten too?’.  Within the final level of the app (level 10), the princess becomes one of the crow people, and players are left to ponder the significance of this change.

The game also has 8 purchasable appendix levels with new content.

Yes: There are new chapters that may be purchased using real-life money, as in-app purchases within the game. These cost $2.76 to purchase.

Accessible via the central menu is an additional options menu, containing Facebook, Fanart and Twitter links to pages associated with the app. There is also a link to the official website for the app.