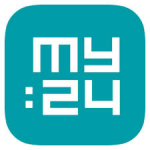 This review of My: 24 was completed by the Australian Council on Children and the Media (ACCM) on 13 January 2015.

This review of My: 24 contains the following information:

There are no levels in this app.

My: 24 is an app that helps the player create a documentary about one day that changed their life. This app is in connection with the My:24 television series.

My:24 is an app, connected to the ABC My:24 television series, that helps players make their own documentary about an important day in their life. The app asks the player to film and describe certain aspects of their lives and then this is edited together to make a short film.

The app has six sections for the player to complete. Section 1 is called ‘About You’. The player is asked their name, age, where they live and then asked to record a video introducing themselves. The second section is ‘Life before My:24’. Here the player is asked to take or upload photographs of them growing up. Then they can record a voice over describing their childhood. Section 3 is ‘My 24’. Here the player can act out and record a video about and important day in their lives. Section 4 is ‘What others have noticed’, and here the player films someone else discussing that important day. Section 5 is ‘My Life after My:24’. The player films a video reflecting about their experience of that day and how they have changed. The final section is ‘The People Who Have Helped’. Here the app asks the player to submit names of people who have influenced them.

Once the player has finished all of these sections, the app will edit them together to make a short film. The film is then saved to the player’s device. This app encourages the player to be creative and to consider how their life is important. It would be valuable for parents to have a discussion with their children prior to using this app about the type of information that is appropriate to put on the internet.

As part of the video the player is asked questions about their life and at the end the app suggests that the player uploads the video to YouTube or Vimeo. However, there are no direct connections between the app and online websites.

There is no advertising but the app is product placement for the ABC and The Australian Children’s Television Foundation.

Allows video content to be shared on the internet.