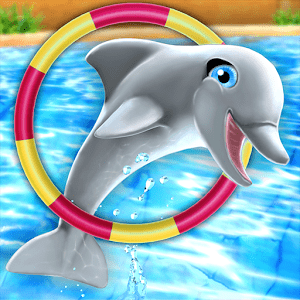 This review of My Dolphin Show was completed by the Australian Council on Children and the Media (ACCM) on 8 June 2016.

This review of My Dolphin Show contains the following information:

This app was reviewed to level 5.

My Dolphin Show is a dolphin training app for children. The objective is to complete a variety of dolphin shows by swiping the screen and earn points. The skills required are strategy, motor skills, and forward thinking.

When the app is first opened, players are presented with a full screen popup displaying “this app contains in-app purchases and advertising messages. In app purchases cost real money, and are charged to your account” Players are instructed that if they wish to disable this, they can adjust the device settings to prevent purchase.

Upon closing this, players are immediately met with a daily bonus of 25,000 coins, and are informed that on day 5, there is a special reward.

In the top right hand corner of the app is a parents section, which asks the player to solve a mathematical equation before entering. Within this section is the terms of use and privacy policy for the app. On the main screen there is also a section where the player is shown the in-app achievements, and the settings. In the settings, the player can adjust the SFX and music volume for the app.

When the play button for the app is pressed, players are met with a variety of locations, and the first unlocked level is Hawaii. Players can also see at the top of the screen, an area that says “Earn 20,000 coins” and a section where they can purchase additional coins for currency. Opening the “earn 20,000 coins” section requires a mathematical equation, and displays an advertisement for another game on the app store such as Rise of Tyrants. These apps are often violent, and casino advertisements form a large part of what is displayed, such as World Series Poker.

In the bottom right hand corner of the app, players can purchase new outfits for their dolphin and dolphin trainer. These range in price from 4,000 coins to 1,000,000 coins, and players can purchase several of these options for either $4.49, or $5.99. Some of the in-store options have “Earn” written on the price, and to use these, players must watch an advertisement for another app. These appear to be mostly composed of casino and gambling apps, such as Double Down Casino. Within the store, players can also purchase “powers” for their dolphin, at $2.99 apiece, and these impact the character’s ability within the app.

Within the store there is a section counting down that says “Free spin”. This section lets players watch an advertisement for an app (infinity slots), and then, after watching this advertisement, the player can spin a wheel and get a random prize. After spinning the wheel, the player can either continue, or can watch another advertisement to get another free spin of the wheel. After the player has had two free spins, the timer resets, and the player cannot spin again for another 10 minutes.

Within the app, the player must create a dolphin show, and encourage their dolphin to jump out of the water and do tricks for the audience by swiping on the screen. The player then swipes the dolphin over an underwater reward. After achieving the predetermined score, the player is rewarded with a small amount of coins. Immediately below how much the player has earned, usually several hundred, there is an option to watch an advertisement for another app and earn 20,000 coins.

As the app progresses, the player can earn more coins for their dolphin tricks, and full screen advertisements for other apps pop up on the screen. These must be manually closed

Players must watch advertisements to unlock other worlds, so that they can progress within the app. For the later levels, players can only unlock these by spending $1.49 per level pack, or completing every level before them.

Advertisements for a massive variety of gambling, violent, and inappropriate apps can be seen constantly within this app.

The female dolphin trainer is presented as a slender, conventionally attractive woman.

This app advertises extensively for a wide variety of casino and gambling style apps.